In his 65th year, Arnold Kauffman has released three books and launched a series of monthlong programs designed to encourage Greater Philadelphians to visit his raw vegan café Arnold’s Way in Lansdale, Pennsylvania. Once there, they can learn how a raw food diet can help them lose weight and overcome all kinds of health challenges, from diabetes to Lyme disease.

Arnold credits his low-fat raw food diet with powering him through 75- to 100-hour workweeks. In his spare time, Arnold wrote The Way of Arnold, which explores this raw pioneer’s diet and fitness routines; Seven-Point-Seven, which traces the stages to disease and steps to optimal health; and Johnny Nucell, an illustrated children’s book that promotes healthful vegan food choices such as fruits and vegetables. All of Arnold’s media, including the book 14 Days of Fasting at Tanglewood and the record Can’t Make a Mistake, is available at the Fruit-Powered store. Arnold is writing even more books, including a children’s raw recipe book. 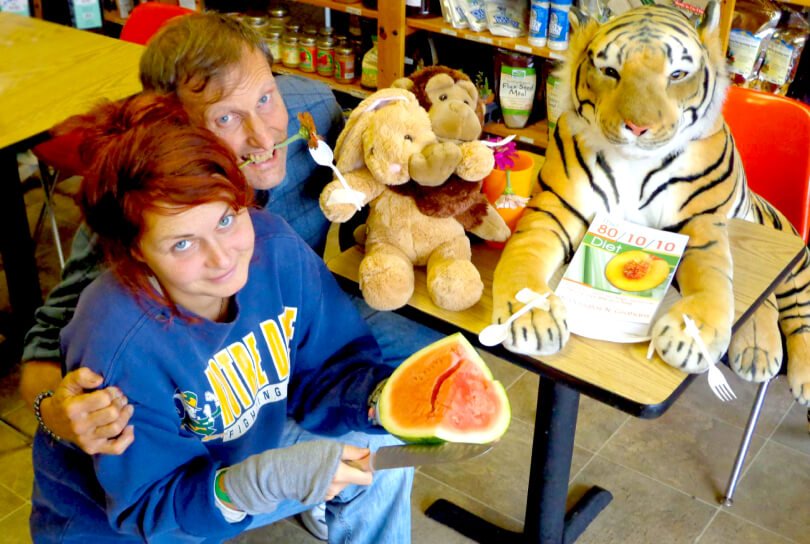 Anna Chmielewska, author of Things You Can Do with Buckwheat in a Raw Kitchen and editor of the former Fruitarianna.com, enjoys a light moment with Arnold Kauffman.

Beyond regularly scheduled class offerings, Arnold is known for creating and launching several programs a year to attract attention to Arnold’s Way and the raw food diet. In December, he gave away thousands of dollars in free meals and led free raw instructional classes with the help of Anna Chmielewska of the former Fruitarianna.com.

“What I wanted to do was create an energetic vibration in Lansdale that weight loss is possible—a viable lifestyle for healthy beings,” Arnold said. “Of the 35 people who signed up, I would say more than 20 actually finished [the program]. Of them, the average weight loss was maybe 15 to 20 pounds. People [had their] aches and pain pretty much go away. I had a guy with Lyme disease for 19 years—it went away. Someone’s acid reflux completely went away. People with diabetes got better. People with heart disease got better. It’s pretty incredible. It was a really good month. I was really excited.”

In January, Arnold gave away more than 450 meals—15 a day for the month. Last month, he offered specials on buckwheat products as an affordable, ecologically sustainable, calorie-rich, low-fat food source for raw fooders after Matthew David of NaturesPilgrim.com extolled the benefits of the food in an Arnold’s Way video during a recent visit. Anna launches Things You Can Do with Buckwheat in a Raw Kitchen, a book featuring 50 recipes, in the Fruit-Powered store on March 8.

In the coming months, Arnold will release a documentary edited by Michael Pifer about December’s 30-day raw transformation program. In the meantime, those wanting to catch Arnold in action on screen need look no farther than their computer or mobile screens if they’re not able to easily drop by for a world-famous Banana Whip. Arnold posts several videos a week to his Arnold’s Way YouTube channel. View more than 900 videos—many featuring testimonials of healing from cancer, diabetes, heart disease, Lyme disease and other conditions thanks to a raw food diet—and subscribe to receive updates.

Even with books, films, videos, classes and programs—Arnold’s Way wouldn’t quite be Arnold’s Way without the food. Arnold has hosted monthly potlucks at Arnold’s Way since 2001, the final year the café was located in Philadelphia’s Manayunk neighborhood before moving to Lansdale, about 20 miles from the City of Brotherly Love. Featuring 20-course organic meals, potlucks in January and February drew an average of 35 people, filling the café for evenings of community and support along with education, thanks to guest speakers who discuss their journeys to optimal health. Speakers in recent time have included Harley “Durianrider” Johnstone of 30BananasADay.com, Megan Elizabeth and Jennifer Thompson of HealthyBliss.net.

“It’s the best deal anywhere,” Arnold said. “You cannot get—anywhere—a buffet for $12, all organic, as much as you can eat.”

Arnold might be at retirement age but has no plans to slow down. He’s built to last, fully committed to the Arnold’s Way mission: “To create an energetic movement for a transformation to a disease-free world.”

“The key, in my mind, is being ‘on purpose,’ ” he said. “If you’re ‘on purpose’ and humble and appreciative of where you’re at, life’s a piece of cake.” 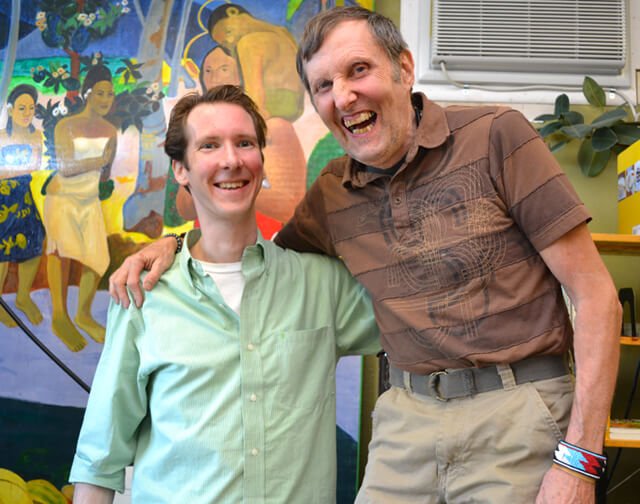 Arnold, standing on a chair, and I goof around at Arnold’s Way on April 20, 2013, the night I hosted my first monthly potluck in place of the raw food pioneer.