Hello, readers. I’m writing my last column from Chiang Mai, Thailand, from where I’m departing in a few days for Greater Philadelphia, my home. I decided to cut my Thailand adventure short after I found home calling me over and over during a Vispassana Meditation retreat I attended last month. In Thailand, halfway across the world from the Northeast United States, I feel as if I’ve dropped out in a few key ways. I’m connected via computers but largely out of touch. Deep down, I am starving for in-person contact to help folks in the Arnold’s Way community succeed on an all-vegan and wholly or mostly raw food diet. Right now, I know I can contribute more to the health movement by returning home.

I write at a time of unfortunate division in our raw food community, and it’s already a splintered bunch, what with the gourmet (high-fat diet) and fruitarian (low-fat diet) camps. Ultimately, I’d say we’re all about improving our health by refraining, first and foremost, from animal products. This single change in person upon person across the world would not only spare sentient creatures their lives but actually give them the opportunity to enjoy lives of freedom, just as we all desire. The environmental impact of this change would be momentous as well.

To see trailblazers such as Harley “Durianrider” Johnstone and Freelee “The Banana Girl”, who run 30BananasADay.com, booted from the pioneers lineup down to special guests at the 2014 Woodstock Fruit Festival sends a message that these longtime fruitarians, putting their bodies on the line, in my opinion, to show others affordable and accessible alternatives to meals of only raw fruits and vegetables, aren’t elite enough to be featured with the rest of the pioneers. Debate is roiling on the remaining pioneers’ lifestyles and business practices as well as whether Harley and Freelee are being judged differently from the rest.

That these YouTube superstars and promoters of veganism, high-carb diets and raw food lifestyles were demoted might be seen as a turnoff to the curious and transitioning vegan or raw fooder. Some might feel they’d be judged too harshly if they were to attend because they still eat cooked foods such as potatoes, rice, pasta and cruelty-free pizza as either Harley and Freelee have recently or even burgers, milk and eggs. Some might want to chat with the Aussies, who might’ve helped provide inspiration or information to save their lives, at Woodstock. Some, I’ve read, are asking for refunds from this year’s festival.

Is there no room at Woodstock to have discussion about real-world transition challenges and backup plans? Where is the peace and love? All this amounts to unhealthful stress.

Most people who ask me about my lifestyle think I’m nuts for eating 20 to 30 bananas a day. But the minute I tell people I got to where I am with my lifestyle in a few simple steps—and these steps were largely effortless and natural to take—they understand. When I tell them they can start losing weight or feeling more energetic and clearer in mind by consuming green smoothies for breakfast, they grasp how simple this single step is. I tell them they’d feel incredible shifts in health if they ate fruits such as grapes during the day before a cooked vegan dinner. “Oh, yeah?” I hear back a lot of times. “I can do that!” What most don’t think they can do is ever go wholly raw because they can’t digest the idea, afford this lifestyle or get enough fruit where they live. Some simply enjoy eating out too much and bristle at the idea of scarfing down salads every time out. 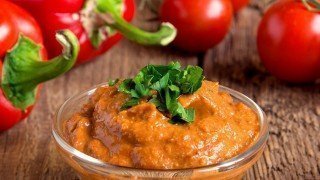 Meeting people where they are at the moment is important for the vegan and raw food movements to grow. I say, if you get people eating fruit for breakfast and lunch, they’re going to figure out in time that they feel their best eating all raw on days they enjoy large salads with hearty dressings such as Pepper-Tomato Walnut Dressing compared with cooked carbs. I sure did while eating vegan burritos in 2011 and the earliest days of 2012. At this point, the ball is in these folks’ court, but cooked carbs can help carry them into the gymnasium—after they knock back a green smoothie and eat a bowl of grapes for two of their day’s meals. If potatoes, rice and beans can also keep people from eating McDonald’s and Pizza Hut fare, I count this as a triumph, even if it’s one step shy of my dream of seeing fruitarianism vibes spread worldwide.

Ultimately, we do what we can, when we can—and almost all of us do things one step at a time. There must be only a few in the world each year, I’d argue, who hit the ground running on a low-fat raw food diet one day and never look back. Almost all of us transition—this is what I usually recommend when discussing coaching—and Harley and Freelee are showing how to do so in their own way.

The mainstream—especially in the United States, where two out of three are overweight or obese and one out of three are affected by diabetes, undiagnosed diabetes and prediabetes—needs dietary change, and it needs it now! What we need is unity, not separation, to bring our message of health to as many as possible, as leaders in this movement want. I don’t necessarily agree with everything Harley and Freelee say or do, but I certainly respect them, and both have helped me tremendously via 30BaD and their videos. Their mission, passion and influence in the wellness movement cannot be denied. 30BananasADay.com is such an enormous, active resource—and I’m not going to list all their YouTube channels, which attract tens of thousands upon tens of thousands of subscribers. Did the pioneers who voted to demote Harley and Freelee ever consider how helpful 30BaD, which has attracted more than 20,000 to register, is? Isn’t 30BaD responsible for driving the most people to the first three Woodstock Fruit Festivals?

I hope for some kind of a reconciliation so our fruit-based movement—however weird it already is to the unknowing—doesn’t break into two camps: wholly raw fruitarianism and mostly raw fruitarianism. Now how weird would this be? It certainly wouldn’t be beneficial for the movement! Let’s work this out and emerge stronger than ever! 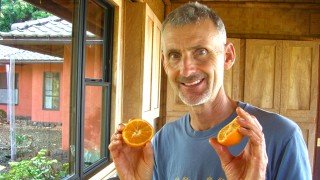 We all can learn from a longtime raw fooder such as Don Weaver, who is profiled in this issue. Don went wholly raw vegan three months before I was born—way back in April 1977! Few folks out there have been raw longer, and Don has become an expert on soil and the environment and calls for massive change now in his book Regenerate the Earth!

From “Your body never makes mistakes” to “What do you want and how badly do you want it?”, I’m fond of sayings by Arnold Kauffman, owner of the raw food café Arnold’s Way in Lansdale, Pennsylvania. My best friend has one that’s stuck for a few years: “Everyone has a theory, and everyone is right.” That’s why I like to bust Fruit-Powered.com out of its mostly fruitarian focus at times to feature proponents of alternate healing modalities such as water fasting. This issue, Loren Lockman, founder and director of the Tanglewood Wellness Center in Costa Rica, contributes a story on his knowledge and experience.

Also this month, look for:

Finally, did you hear: Former U.S. Vice President Al Gore has adopted a vegan diet, joining former President Bill Clinton, who eats an almost entirely vegan diet! It was an Inconvenient Truth that this climate-change educator was an omnivore for too long. Congratulations are in order, Mr. Gore! I’d love to see a widely distributed film featuring a talk by Al about how veganism can help save the planet.

I wish you happy holidays!

New additions to the growing Fruit-Powered store: The Art of Rejuvenation by Dr. David Klein; Fruit Can Heal You! and Fruitarian Diet & Physical Rejuvenation by O.L.M. Abramowski; Introducing Natural Hygiene by T.C. Fry, Regenerate the Earth! by Don Weaver and From Sickness to Health by Anna Chmielewska. Even more titles coming soon!