Censorship Is Making It Harder Than Ever to Find Natural Health Content. Help Your Family and Friends Plus Fruit-Powered by Sharing!
💛 Complete the Circle of Giving by Supporting This Content! 💛
Shop in the Fruit-Powered Store
Donate to Fruit-Powered
Arnold Kauffman has done lots in the past 22 years. He’s opened and operated the raw vegan café Arnold’s Way, written five books, launched an album and five films, produced more than 1,000 videos on his YouTube channel and started the 30-Day Raw Challenge.

But paint and create visual arts, Arnold, 66, had not—until the past year. Arnold began painting and creating mixed-media artwork and has produced four pieces. This collection represents the first artwork he’s created since he was 13 years old, growing up in Philadelphia.

“Art for me is creating a world with no boundaries, where right becomes wrong and wrong becomes right,” Arnold said. “Where I am the creator and am not judged for my thoughts or actions. It’s an opportunity to flow with my innermost thoughts and outermost possibilities, where I am not bound or constricted by the rules of society.”

View a Gallery of Arnold Kauffman Artwork from 2013 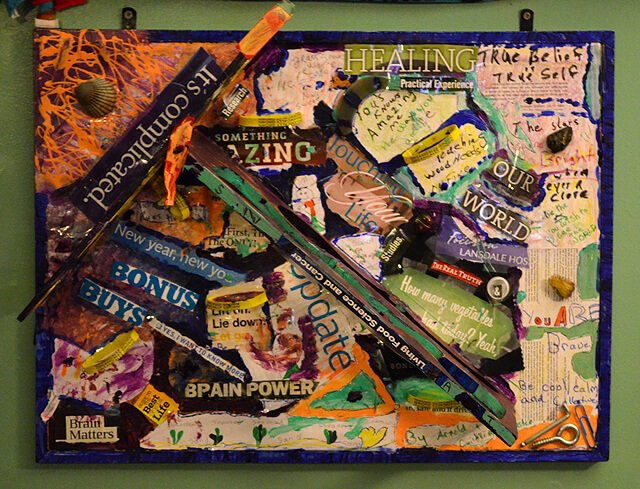 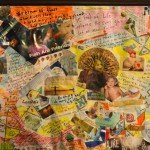 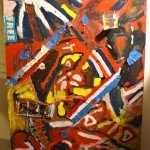 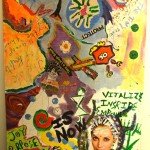 Arnold is influenced by the works of Jackson Pollack and Salvador Dalí. His semi-regular trips to the Philadelphia Museum of Art ignited deep inside him the fire to create art himself. 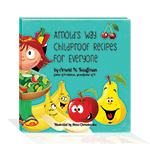 “I was seeing the greats in the artistic world,” he said. “I said to myself, ‘You know what, I can do that.'”

Arnold is frequently surrounded by artists at Arnold’s Way and at home. He’s enjoyed friendships in recent years with Jessica Thim, Anna Chmielewska and Michael Pifer. These artists have breathed their creative forces into three of Arnold’s books, all released in 2013: Johnny Nucell, Arnold’s Way Childproof Recipes for Everyone and Seven-Point-Seven.