‘Eating a Lot of Fruit Can Put You into an Incredibly Beneficial Emotional State of Joy, Gratitude and Openness.’

In photographs of fruit festival attendees the past few years, there’s a good chance you’ll spot Ronnie Smith and his trademark lush, thick brown beard. This 30-year-old Glasgow, Scotland, resident and native celebrated with scores of fruit lovers at almost 10 festivals before organizing the first UK FruitFest in 2014.

It was just four years ago, in September 2011, when Ronnie recalls feeling “a little stuck” in his life. He made an intention to progress as an individual, he said. He consumed a vegetarian diet, and when a friend shared a link on Facebook for the documentary Earthlings, Ronnie’s world opened up to veganism. 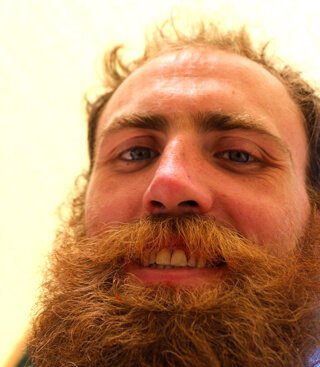 “Of course, I had no idea what a vegan diet entailed and assumed there was some special process for getting enough protein and other nutrients,” he said. “I went to YouTube to look up the topic and came across a video called “The Protein Myth” by raw vegan runner Tim Van Orden. In the video, he specifically said he was only eating fruits and vegetables and yet was able to build muscle and outpower younger athletes in stair-climbing races.”

Ronnie was inspired by what he heard and began pursuing a raw vegan diet. Before long, he discovered Doug Graham’s book The 80/10/10 Diet, which is built on a low-fat, fruit-based raw food diet, and videos produced by Harley “Durianrider” Johnstone and many others. Ronnie attended the 2012 Woodstock Fruit Festival, the first of 11 festivals he’s enjoyed.

When Ronnie got going on a fruit-based diet, he noticed that several aches and pains throughout his body “disappeared almost instantly.” Ronnie also discovered bliss and was drawn to nature.

In a Nutshell: Ronnie Smith

“I have had many experiences of how eating a lot of fruit can put you into an incredibly beneficial emotional state of joy, gratitude and openness,” he said. “I got in touch with aspects of my real and natural self and became more connected to nature, particularly trees. I am more aware of the effect being in nature has on my being.”

Then there’s the mental improvements Ronnie’s experienced. “I feel like my mind has changed a lot, and my brain seems to function in a different way,” he said. “I seem to be able to work certain things out faster than before and see the ‘bigger picture’ in everything.”

Ronnie said that he feels more vitality now compared with at the start of his raw food journey but that he can stumble from the heights he’s reached if he neglects key lifestyle components such as adequate restful sleep.

A recent experience eating too much fatty tahini only bolsters Ronnie’s belief in the powers of a low-fat raw food diet. “Since giving up the tahini, I noticed a dramatic improvement in energy, enthusiasm and vitality. It’s another indicator to me that low-fat raw vegan is the way to go.” 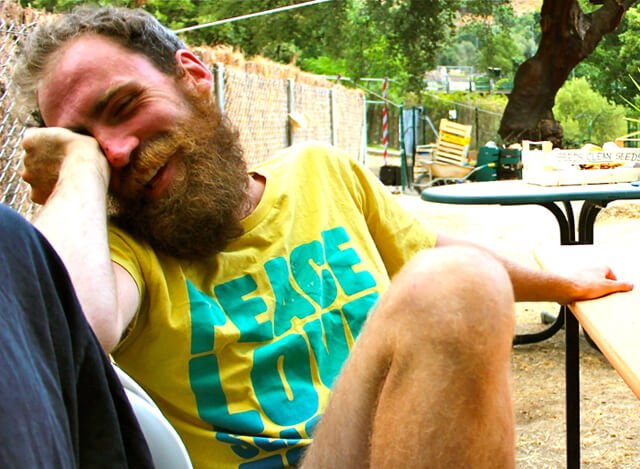 For exercise, Ronnie practices aikido, a form of martial arts, twice a week. He said he’s exploring ways to boost his level of fitness by playing a competitive sport such as tennis, basketball and football—or soccer, in the United States.

“I have achieved some interesting feats athletically without much training,” Ronnie said. “I ran 22 miles on a trail course at The Woodstock Fruit Festival without stopping despite not being much of a runner. The next day, I had no pain and very little feeling of fatigue in my legs. Recovery can be very quick.”

Ronnie’s also completed a sprint triathlon without any training. “I have no doubt a low-fat fruit-based diet supports any athletic pursuit the best,” he said.

Ronnie has played guitar for two decades and singing and writing songs for the majority of these years. He has noticed that his singing voice has improved, achieving greater clarity and consistency, while on a raw food diet. His changing perspective has informed his songwriting as well. “The experience and the vision of a greater world that I have seen at the fruit festivals has definitely entered into some of my music,” he said.

On an average day, Ronnie often buys fruits—grapes, cherries and berries, for example, among other ripe and ready-to-eat selections—at a shop on his way to work. He sometimes picks up a couple of liters of orange juice and, occasionally, if he’s “not organized,” the OJ might be pasteurized. Ronnie consumes a couple of avocados some days.

When he’s at home, Ronnie enjoys preparing large smoothies using calorie-rich bananas or dates as the main ingredient. He also snacks on fruits he’s stored and sometimes makes savory meals such as a guacamole dip or eats tomatoes, dried in his dehydrator. He sometimes cranks out zucchini noodles using a spiralizer, topping them with a basic dressing such as his Simple Tomato Salad Dressing, made with four ingredients.

Ronnie’s had a thing for peas lately. He defrosts frozen peas and eats them with a sauce. “I see this as a bit of a bad habit and something I am moving away from,” he said.

Ronnie’s in tune to how he responds to consuming fruit vs. fat. “Fat is enjoyable, but, to me, it is pretty clear that almost any source of overt fat leaves you a little more drained and foggy-headed than you want to be,” he said.

Durian tops Ronnie’s list of favorite fruits. “It is rare to get a good one outside of Southeast Asia so I don’t eat it that much,” he said. He also enjoys Pakistani honey mangos and cherimoyas. “I think bananas get left out of this conversation a lot, but I think they make me feel better than any other food,” Ronnie said.

Ronnie eats only a small amount of greens at the moment but said lamb’s lettuce is his favorite kind.

Ronnie is enthused about soon getting some apples from his parents’ garden, which contains nine apple trees. A strawberry patch grows in this garden, and Ronnie recently noticed some blueberries growing whose planting he had forgotten about. “I don’t get a significant amount of food that way, but that will gradually grow as the trees develop,” he said.

Ronnie aims to get to wholesale markets to take advantage of rock-bottom prices connected to buying in bulk, but limited hours usually keep Ronnie paying extra at supermarkets.

After four years on a vegan diet and three years on a raw vegan diet, Ronnie has not taken a single supplement. “I feel that this has become a little bit of a boogieman in the raw and vegan movement,” he said, “with people recommending new supplements every year.

“I am not dogmatic about supplementation, but I feel that certain health educators are crossing a line and diagnosing—and sometimes inventing—medical problems by analysing blood tests and listening to a person’s health concerns,” he said. “I think this is not only illegal but dangerous, and only a doctor should be diagnosing illness and prescribing treatments.”

Ronnie thinks it’s critical to look at all factors of health before determining whether one is deficient in a nutrient and requires supplementation. Ronnie dismisses claims that our food supply is less nutritious than it was years ago as well as that fruits lack richness in taste compared with previous eras.

“I think our food is probably better now than ever,” he said. “There is a lot more competition now, and farmers are held to high standards.”

To help them achieve success, Ronnie strongly recommends fledgling raw fooders get out and meet fellow raw fooders and even attend events such as fruit festivals to forge lasting connections and learn from experienced fruit lovers. He encourages transitioning raw fooders to read The 80/10/10 Diet and watch and learn from Graham’s nutrition lectures.

Ronnie also recommends those new to a raw food diet to learn how much fruit they need to fuel themselves and meet their caloric needs. He cites a blender as a must-have tool in a raw fooder’s kitchen.

“Keep going and learning,” he said. “You won’t get there overnight. Just keep learning and making changes.”

Finally, Ronnie said to eat slowly. “Be aware of the cues from your stomach,” he said. “Don’t try to force-feed or speed-eat fruit. You will end up with ‘melon belly.’”

To anyone who’s facing challenges while shedding old dietary habits or still willfully clinging to animal, cooked and processed foods, Ronnie said health cannot be ignored. “Don’t neglect your health,” he said. “Make it a top priority in your life and start working on changing your habits to those that support your health. Believe in raw food, believe in fruit—it will support you in achieving anything you dream of in life.”

After going to so many gatherings, Ronnie dreamed up the idea of throwing a fruit festival in the United Kingdom. He approached Graham, who lives much of the year in England, about this possibility—and the UK FruitFest was announced at Woodstock.

“We have had two great events so far and hope to put on more,” he said. “They are a lot smaller than Woodstock—this year we had 82 people—but I hope it can grow to something bigger. I think our fruit quality and the food in general has been exceptional both times. I recommend any of these events highly to anyone.”

Ronnie’s supremely enjoyed making friends with fruit enthusiasts from around the world at all the festivals he’s attended. “At these events, I have met some of the most wonderful people I could ever hope to meet,” he said. “It makes me quite emotional, thinking about it really. The people have generally been the highlight—and meeting some of the inspirational leaders in the raw food movement.”

Ten years from now, Ronnie desires to enjoy a lifestyle that enables him to spend winters in the tropics. “I would love to be surrounded by a community of like-minded fruitarian types living close to nature,” he said.

Ronnie also visualizes growing the UK FruitFest into a thriving event, put together each year by a large team of people. Finally, Ronnie sees himself writing and recording music.

Ronnie’s website is FruityRonster.com, and he broadcasts regular videos on a range of health topics on his YouTube channel. He is the author of How to Be a Raw Vegan Smart Ass. “I hope that I can support myself financially,” he said, “through starting and growing businesses that are in alignment with the principles of promoting health.” 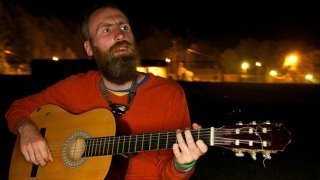 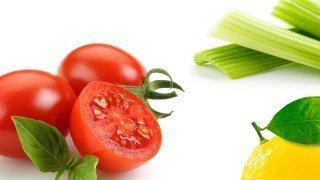