If you ask raw fooders how much water they drink, you’ll hear quite a range of answers. A thought occurred to me one recent day while thinking about the vastly different water content of fruits: All these answers depend on food intake and several other factors, making the magical ounce—or milliliter, for friends following the metric system—number completely arbitrary.

To put these numbers into perspective, just because I consume 4,000 calories a day (yes, I’m back to this!) from a diet of mostly fruit, an ample amount of greens and healthful amount of fats doesn’t mean this caloric consumption should be the model for all men on a raw food diet. Most, I think, would agree with this statement, although some baselines to consume “X” amount if you’re a man and “Y” amount if you’re a woman persist.

When it comes to water consumption, however, I find that what some in the raw food community say seems to carry greater weight than straight-up caloric needs in being a benchmark to strive for. I certainly recall being impressionable in this department while getting my sea legs and experimenting with the advice of many. I’ve also heard others say they’ve followed water recommendations—extreme in either direction, depending on how you view water consumption—based on what some raw food leaders say. 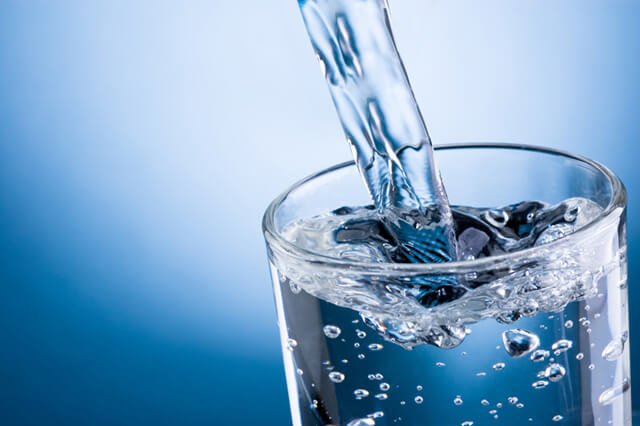 For a brief period in mid- to late 2011, found myself gulping down about 150 ounces of water a day after hearing from an energetic raw fooder about our body’s great need for water. He insisted we need an ounce per pound at the minimum. I wound up getting up two to three times in the middle of the night to pee. I later learned this person consumes quite a bit of sea salt in addition to running several dozen miles a week. A year ago, however, he claimed to drink 3 gallons a day—a whopping 384 ounces!

I almost fell out of my seat in doing the math on this one. One would have to drink an astounding 24 ounces of water per hour if awake 16 hours a day to reach this sky-high amount. This is 1 ounce for every 2½ minutes awake! Where’s the room for bananas?

Harley “Durianrider” Johnstone argues that we should drink enough water so that our urination is clear in color. A proponent of water fasting and efficiency in bodily functions, Dr. Robert Lockhart has said that too much consumption robs our bodies of nerve energy because of increased demands to eliminate this excess.

Some raw fooders claim to drink no water at all even while adding water to make fruit smoothies and green smoothies!

In Introducing Natural Hygiene, T.C. Fry writes that “man is not a drinking animal except in abnormal situations.” He goes on to say that raw fooders have a 60 to 70 percent less need for water than those on the standard American diet.

From 384 ounces to practically zero ounces? What’s a fledgling raw fooder, wanting to follow a script or program to the letter or number, to do?

The answer is to drink according to your needs.

Yep, you’re in charge. You hear this loud and clear?

You see, everyone’s needs depend not only on how much fruits and vegetables he or she eats but for how long he or she has made these water-rich, life-giving foods a significant part of his or her diet—if not comprising his or her entire diet. Factor in age, activity level, weather and location, and you’re bound to see differences from person to person.

Here’s another caveat: Bananas contain 75 percent water, and watermelon boasts 92 percent water. Medjool dates? Just 21 percent. So if you start your day with watermelon and eat other high-water fruits such as oranges, you’re likely to require less water compared with a person chomping on bananas and dates.

Now, as far as what kind of water to drink, well, this is a whole other matter—and sometimes brings heated debate, from what I’ve seen on Facebook! I can tell you I’ve enjoyed the clean, crisp water my Megahome Countertop Water Distiller has pumped out since purchasing this 1-gallon unit in summer 2014.