‘Seeing Nature’s Perpetual Change Unfold Before My Very Senses of Sight, Touch and Taste Is So Rewarding.’

Evan Rock found peace and a new life in fruit, meditation and yoga. He is enjoying life on a neglected rare-fruit orchard on the Big Island of Hawaii, building an off-grid eco-community and retreat center called Fruition, after turning his back on a career in real estate in Los Angeles, California.

Evan said he had long dreamed about moving to Hawaii, a dream that became more present since he started eating a fruit-based diet.

“Working at a moldy building in a smoggy city, it became clear to me that the plethora of choices found in every department store and supermarket was a false sense of freedom,” he said. “Everything—from our home, our relationships, the media, to so-called ‘conveniences’—seem to keep us happy with society’s machine. We are just a cog in the wheel of this socio-economic system. Nietzsche calls these people, who obliviously accept their servitude, the ‘superfluous ones.’” 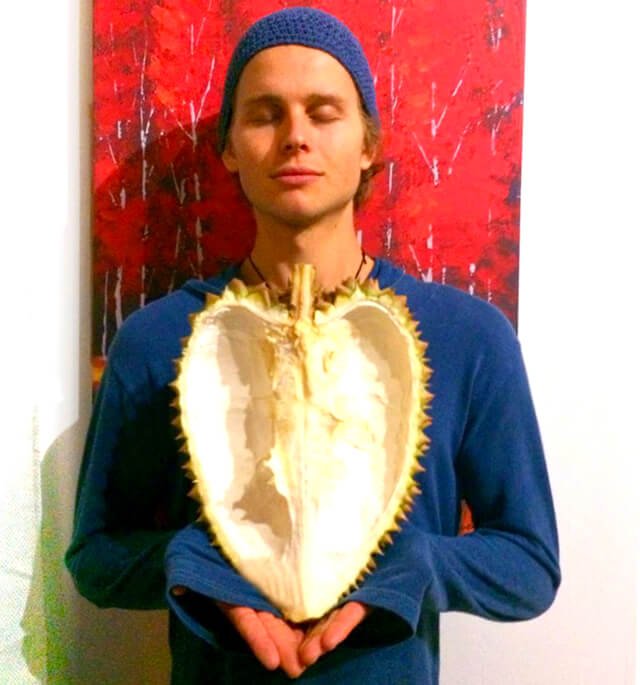 For Evan, returning to nature and finding himself were experiences that coalesced, much as they had for Eastern mystics and Western naturalists such as Ralph Waldo Emerson, Henry David Thoreau and John Muir, as he described.

“I was sick of drinking and eating food grown by someone other than me and shipped halfway around the world,” he said. “Now, I am a steward of a beautiful piece of land with edible plants and fruit trees, harvesting rainwater and solar power, and spending my days reaping that which I sow. Seeing nature’s perpetual change unfold before my very senses of sight, touch and taste is so rewarding.” 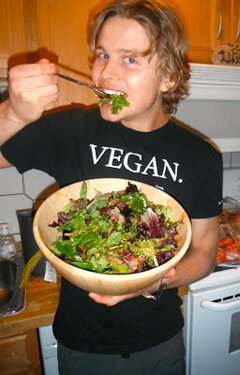 A 28-year-old Hilo resident, Evan went raw five years ago. “I jump in the pool instead of dipping my toe in,” Evan said. “Therefore, I went raw vegan pretty much overnight when I heard about it, which was primarily from watching the LifeRegenerator and Durianrider on YouTube back in late 2009. I went vegan after watching Earthlings a year or so prior to going raw, which definitely helped in my journey back towards health.”

After going raw, Evan’s joint pain, brought on by a snowboarding accident and affecting his elbow, vanished. He also noticed his bowel movements, once affected by constipation, became regular. The fatigue he had experienced from excess caffeine and alcohol consumption gave rise to lightning-bolt energy, and Evan found himself exercising frequently and with enjoyment.

Evan’s favorite benefit of being raw vegan is a “more relaxed and centered state of awareness.” He highlights that this benefit was also attained by his adoption of a meditation practice.

“I feel more at peace with my surroundings and within my own head,” Evan said. “To me, fruit consumption seems correlated with abundance consciousness. Supplying the brain with a steady stream of glucose makes certain mental tasks that were once hard seemingly much easier. I started playing the piano again after taking several years away and have made many improvements in my ability to learn pieces and play them from memory.” 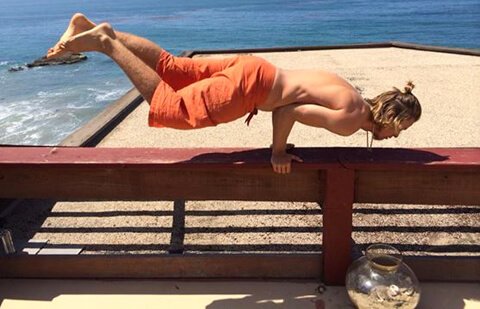 Along with a raw food diet and meditation, yoga has been instrumental in Evan’s life. His practice enabled him to heal from shoulder and back pain connected to an arm injury he suffered during his freshman year of college. Evan discovered so much more in yoga, however, saying it helped him become more flexible mentally and emotionally.

“I found myself being less opinionated and defensive,” he said. “I became more open-minded and willing to explore the new, which eventually led me to meditation.”

At the time, Evan was “desperate” for something to help him manage his frustration with life.

“I was sitting in L.A. traffic day in and day out and not making any money at a commission-based, cold-calling real estate career,” he said. “The dreams of success that I thought would surely come after college seemed impossible. I came out of school right at the beginning of the recession in late 2007, and it wasn’t pretty.”

At a house party, Evan met a woman who resonated a “peaceful and joyful demeanor.” He was intrigued and inquired about her story. The woman told him she was a meditation teacher and said she offered occasional weekend workshops. 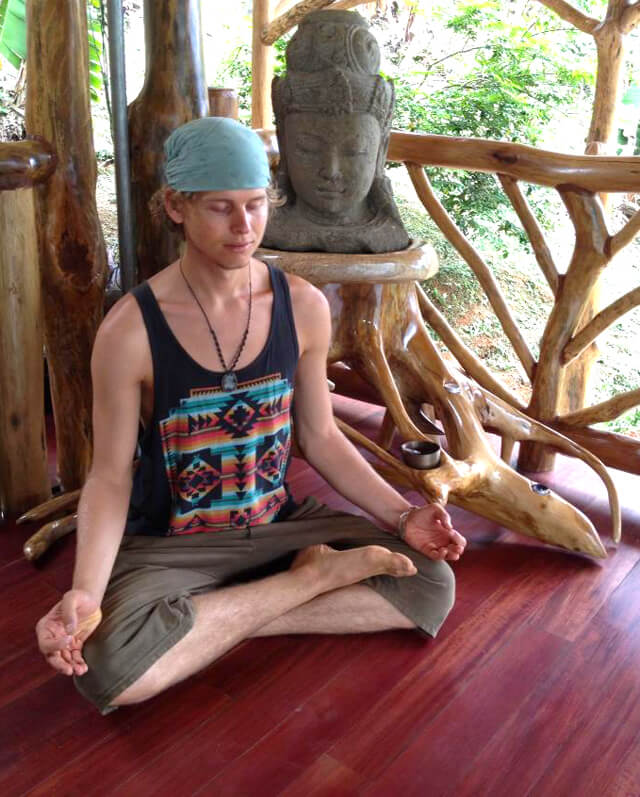 “I attended the weekend of intensive meditation, exposing myself to various techniques from mantra to whirling to staring, humming and even gibberish and chaotic meditations,” he said. “None of them appealed to me, but during a short silent sitting, zazen style, meditation, I had a glimpse of something completely new. It was a state of being that I had not experienced before, and I was extremely motivated to replicate it. Since that day, I have not skipped a morning meditation, even though what I now consider a meditative state was a very rare occurrence back then. Maybe once every couple of weeks for a few minutes, despite my consistent daily efforts.”

Meditation has radically changed Evan’s life and the way he experiences his days. He meditates for 45 to 60 minutes every morning and said his practice increasingly merges into routine activities.

“I wouldn’t want to start my day any other way,” Evan said. “Nothing is more important. … I feel more awake than at any time in my life. It feels as if now I am finally living in the present moment, which I avoided for decades. Meditation is the single most important discovery in my life. That being said, it is a tool—nothing more—helping only to wake you up and remove conditionings.”

Evan said that he’s unaware what percentage of his calories comprise fat and that he doesn’t consume a strict low-fat raw food diet. He went without consuming overt fats for almost two years but said he feels “much better” and “much more stable and grounded” eating some overt fat.

Evan’s favorite fruits are durian and cempedak. “If I had to pick one food to live off for the rest of my life, it would be durian,” he said. “I see it as not only the most delicious but also extremely nourishing.”

With physical activity, in addition to his yoga practice, Evan has been busy of late on his recently purchased land in Hawaii working on construction, pulling weeds and trimming trees. “My stamina and strength are more than adequate for my needs,” he said, adding that he enjoys swims, hill sprints after trips to waterfalls and occasionally lifts weights and does pull-ups. A few years ago, he achieved personal records, completing an Olympic-distance triathlon. 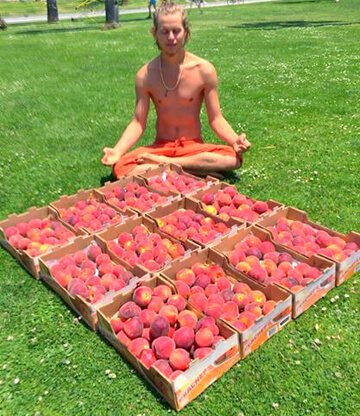 Evan supplements only with sublingual Vitamin B12 and occasionally hemp protein powder. “I enjoy the hemp partially because of the taste but also because it seems help me retain a little more muscle mass,” he said. “I have gone years without protein supplementation and I feel better with it, unless I am really eating a lot of greens, which can be hard in the tropics. A serving usually amounts to a few heaping tablespoons.”

Evan last got a blood test a few years ago and said his results were fine. Because he feels healthy, he said he doesn’t feel the need for more regular tests.

Those desiring to change their diets are best served transitioning to a raw food diet and not going 100 percent unless “called to it intuitively,” Evan said. “Just focus on developing an enjoyment of raw food, both how it tastes and how it makes you feel,” he said. “Drop the labels and forget the ideologies. Eat what feels natural and focus on following your body’s cravings, not the gluttonous desires of the mind.”

Evan reveals fragments of his life on his YouTube channels, YouTube.com/FruitZen and YouTube.com/EvantheRock. Viewers can gain insight on raw food, meditation, yoga and a slice of life on what it’s like to live on a fruit orchard in Hawaii, making one dream after another come true.

“It is a delicious affair and I hope to share it with those who are interested,” Evan said about his land. “I see Fruition as being a place of learning, healing and reconnection with nature. Like-minded souls can hopefully visit here in the future as accommodations become more complete. I just want to take things slowly and let this sharing evolve naturally.” 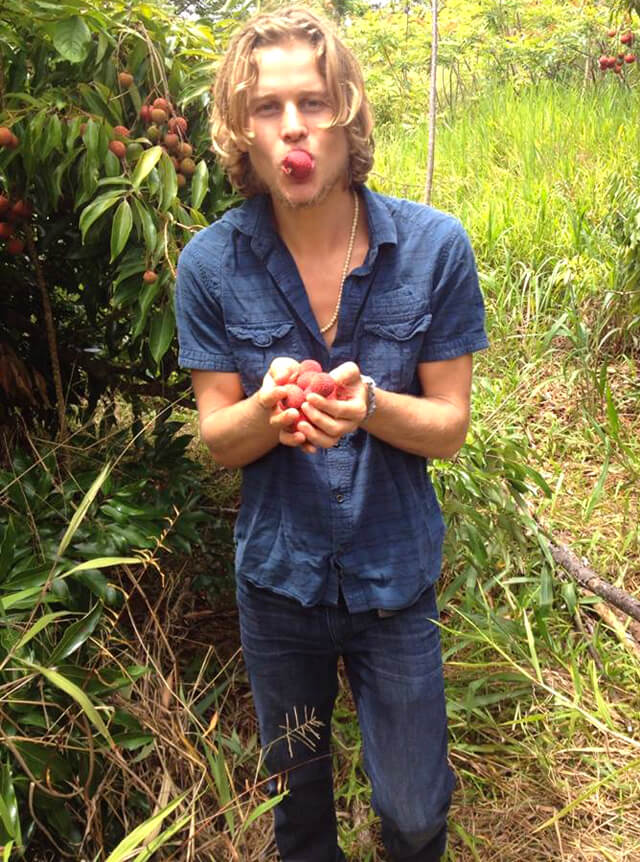 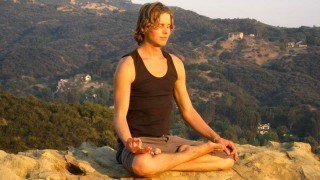 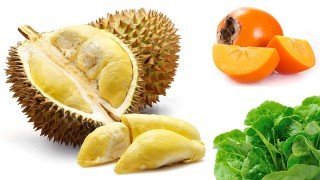