In the midst of summer morn, when everything lies still and one can find true beauty just by their own existence, I am awake, frantically searching for words, for thoughts, for writing of my experience with creating Raw Experience 3 Festival. This is an all-day raw food festival, to be held August 3 at my café, Arnold’s Way, and adjacent locations, started by me. Wowie kazowie—it’s going to happen!

It was, I dare say, about two months ago, when I was literally just observing a video about food, about nature, about how mankind is on the verge of destroying itself. As owner of a raw food restaurant, producer of two documentaries and author of several books, you’d think I would be somewhat astounded, somewhat aghast, somewhat angry about all these things that were being shown. Quite the opposite. I’ve seen these types of films way too often. I was somewhat numbed, somewhat bored, somewhat looking for something else to do. It is on this miniscule scale of nothingness that Raw Experience 3 got started. 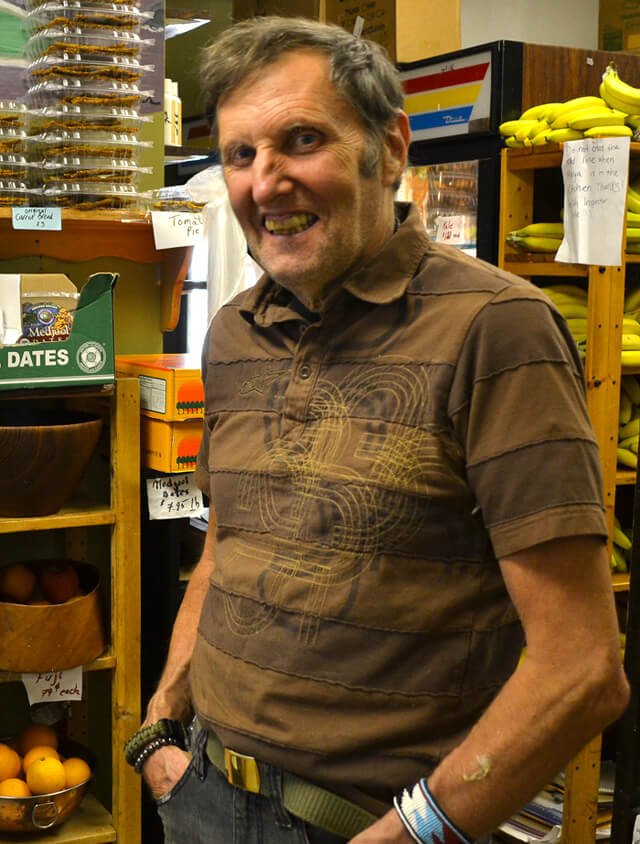 During these moments of boredom, I got into a conversation with another restauranteur who has the same drive that I do and wants to do something but is not quite sure what. Under all this detachment, we both knew that even if we know all the horrors that exist in the making of the food, on the dependency on the medical community to fix the problems within us caused by the partaking of the food, that our energies and commitment to be the change we want to see are still a drop in the bucket. There is such a tremendous numbness that exists in the majority of people that exist around us. Thus began our conversation. Thus began what we can do to bring more awareness to not only our community but the bigger picture. What changes one community affects the world as well, I think.

The following day I set upon a journey to make these thoughts a reality. Having done two previous festivals, I was familiar with how to set up a third. The first one was held almost four years ago and was grandiose, having about 400 to 500 people in attendance and participation at a time when the raw community was just starting to charge up. It was the thing to do, and excitement was spreading.

A shining star had been created, and people want a piece of that. Everything went smoothly, and the magic of touching so many lives with the raw lifestyle was monumental. What I didn’t realize then as I do now is that this magical umbrella of creating a mystical change within us is ongoing—not only for just one day, one month, one year.

To be inspired to change your whole lifestyle from eating a standard American diet to a mostly raw vegan diet is beyond most people’s grasp. The average American wants to be entertained, numbed and accepted by those around him or her. Most of the 400 to 500 people who were so enthusiastic about the raw vegan lifestyle faded away into the woodwork, never to be seen again.

My second event took on a much different aura. It happened on a much smaller level with a different purpose, different vibe, different intention. As with the first one, I had my trusty partner in crime, Megan Elizabeth, working alongside me. So, on some level, I was fearless, unafraid, knowing she would pick up the slack and cover all my weaknesses. I know it’s almost physically impossible to do it by yourself. There are just too many details to cover, too many possibilities in which things can go wrong.

Megan Elizabeth, although only 22 at the time, was my partner in sharing the zeal, energy, light and beauty that we do not have to live in a world of suffering and pain. It is with this understanding that she worked with me for more than three years tirelessly on so many projects. She, too, had once lived in darkness, in pain—without hope for more than one year, having so many medical issues. She saw the light, and it became who she is. She discovered that by eating a diet of mostly fruit and leafy greens, by going to bed early, by exercising and by allowing the body to heal, her body renewed itself. Megan began working with me with that knowledge to help me spread the word. Once she moved on, my zeal for having another one-day extravaganza stopped for almost four years. I was not willing to accept that responsibility by myself.

It is within that framework that Raw Experience came about. I thought I found my support, my day-in, day-out sidekick to create another super event—not quite as big as the first but much bigger than the second one. This year, I created a formula to give people the ongoing support to not only start a raw food lifestyle but continue with it. For whatever reason, the past year I’ve been on fire to expand the raw movement just by my being. Tired of watching people come and go in the raw movement, I had to create a viable reality that by changing one’s dietary lifestyle to a mostly raw vegan lifestyle, he or she will see definitive results.

In December 2012, I did exactly that. I took 30 people, fed them for free for 30 days and filmed the results. The results, visible in 30 Days Raw, were nothing short of spectacular. The people who took part saw dramatic results in their well-being. They, in turn, began telling their friends, neighbors and family. The program became so successful that I began offering this program monthly. What happened was that the raw vegan community, which was barely existing in my area, for lack of a better word, began returning to life. As my programs began inspiring people, I became inspired to do more. In this vein, I completed three books and one more documentary, about 30 women, called Breast Cancer Awakening. In this film, I took 30 female volunteers, fed them free meals for a month and filmed the results. Once more, the results were spectacular.

It is with this understanding that I took on the Raw Experience 3 Festival. The raw vegan lifestyle was once more alive in Greater Philadelphia, renewed after being stagnant for almost three yeras. I created a support group that would help me put on another successful festival.

On May 1, I began creating the groundwork for Raw Experience 3. I had everything lined up, so I thought. Within two days, I had the 15 chefs. I had the speakers. I had the three locations to have a multidimensional extravaganza. I also knew in my heart and soul that in order to reach as many people as possible, I had to pre-sell the event to such an extent that I was giving it away for free. To a great extent, I was subsidizing the whole event, meaning I was selling tickets for $10, including a $5 food coupon at my café. Plus, I was subsidizing all the food demonstrations—with samples for everyone. Although, from the surface, I would lose money, the reality is the more you give away, the universe provides.

Thus, it began with one month of successfully getting all this together. My dream team of support faded into the sun. What I thought I could do I found that I couldn’t. At the peak of momentum of Raw Experience 3 being supersuccessful, I was on the verge of calling it off. As the universe taketh, so, too, the universe giveth. What strength I needed to make it happen came to me.

I was joined by different partners in crime who would help me with all the details. They were like guided angels who took over different responsibilities, from creating an exquisite website as a base for people to view the event. Anna Chmielewska [of the former SweetVeganNature.com], who was also my partner in crime for the first documentary, built this website. Roberta Fortune took charge of the vendors, which would help support the venue as well as make it more rounded. Jenee Hallick [of the former FruityGypsy.com] came as an angel of light. She helped show others that the raw vegan lifestyle is a viable alternative to empower ourselves and those around us.

To everyone, I thank you.