Muang Mai Market in Chiang Mai, Thailand, is touted to be among the largest fruit and vegetable markets in the world. It’s the largest wholesale market in this northern Thailand city of 150,000 residents (almost 1 million live in the metropolitan area), and stand after stand—dozens of them along three primary paths—offers a galaxy of colorful, delicious fruits such as common staples bananas, mangos and watermelon as well as tropical delights such as dragon fruit, durian and rambutans.

The market meanders into several small outcoves, often loaded with pineapple or watermelon, and spills into several large open-air buildings that resemble airplane hangars. In these hangars, bananas, including varieties such as the small lady finger bananas, especially reign supreme and can be bought cheaply. Two hands each of 12 to 16 near-ripe nanners fetches about 100 baht ($3.33), with ready-to-eat bananas costing less. 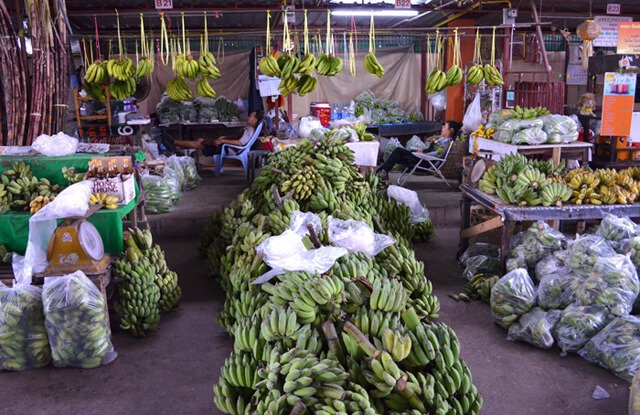 Loads and loads of bananas! I call this “hangar” The Banana Factory.

Some raw fooders might have a hard time stomaching the sights and smell of animal and fish flesh sold in the market, but once you’ve walked around the market a few times, these areas can be mostly or even entirely avoided.

Is Muang Mai Market a fruit lover’s paradise? In many ways, yes, but in some ways, no. Heading into Muang Mai Market the first time, in mid-October, I had, admittedly, unfair expectations. Anything short of everything—meaning the selection—would be a bit of a letdown. A morning favorite, oranges, are harder to come by and quite pricey in comparison with other fruits, and berries—my strawberries!—are nowhere to be found. Jackfruit, which had been my most-sought-after fruit in the time leading up to my journey, isn’t as easily found as I had imagined. Most of the jackfruit I see in this market are smaller fruits, which I’ve learned cannot be eaten raw. 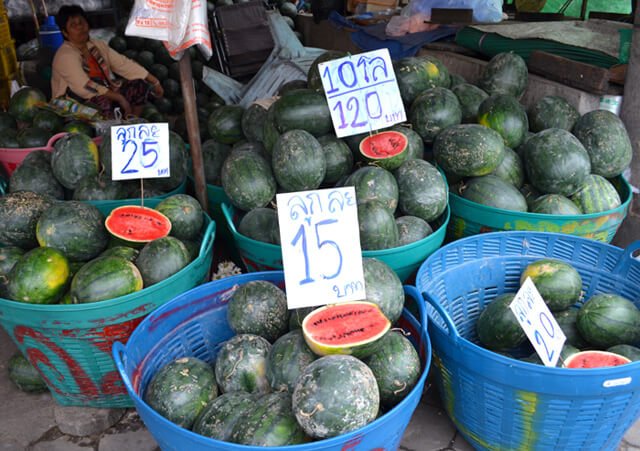 I picked up one of these personal watermelons in late October for 50 baht ($1.67).

On the plus side, I’ve gotten to sample some fruits, including the ridiculously tasty mangosteen and passion fruit, new to me and have many more to taste! Snake fruit, whose deep-red shell resembles strawberries, offers a sharp sweet and acidic taste inside that dances on the tongue! With mangosteen and passion fruit, it’s among my early favorites but definitely not fruits for monomeals. Cheap mangos, whose price here varies widely (20 to 65 bhat, or 67 cents to $2 per kilogram, based on ripeness and quality) but which ordinarily cost $1 apiece in Greater Philadelphia, are refreshing!

As for durian, let’s say this fruit eater hasn’t fallen yet for this strongly scented, spiky fruit, known to have an acquired taste but is a favorite among many. 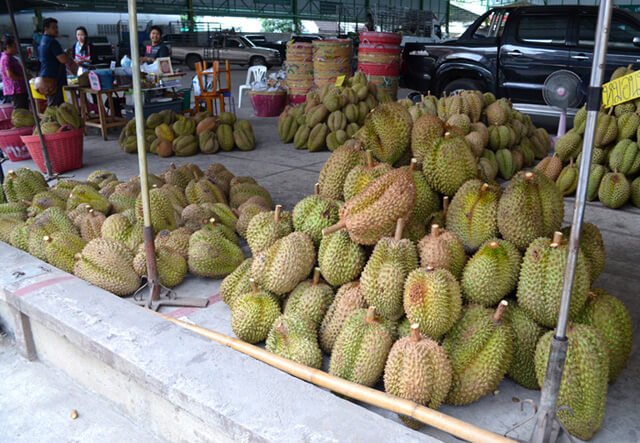 Greens leave a lot to be desired despite being available in great quantities. Butter, red leaf and romaine lettuces and celery, which Westerners are familiar with, aren’t readily available at Muang Mai Market, and some locally grown varieties aren’t too palatable. I see green leaf lettuce at many stands but am aware they’re likely sprayed heavily with pesticides, some of which are outlawed in the United States. Luckily, the small market Baan Suan Pak, offering organically grown lettuces, celery, tomatoes, peppers and other foods, is nearby.

In traveling the past month, I’ve learned how much I took for granted that the United States grows—and imports—so much food. Additionally, despite the large selection of fruits in Muang Mai Market and throughout Chiang Mai, I’m finding I still gravitate toward old favorites because I know I can make a meal out of them. This might change—if I can get a hold of jackfruit regularly. 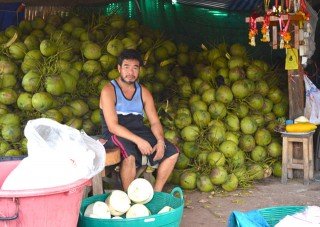 A worker pauses for rest after cutting coconuts. 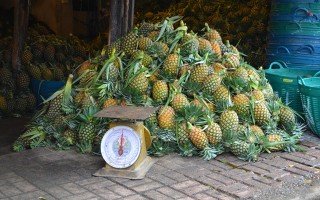 Pineapple mound. These are sometimes sliced and sold for 10 baht (33 cents) per medium-size tray. 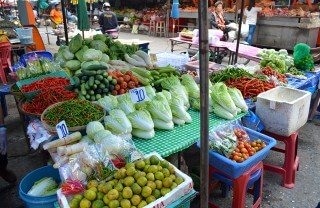 A mix of items ready for the taking. 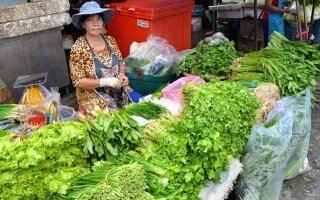 The market stretches on along three primary paths and includes several “hangar”-type buildings and outcoves. 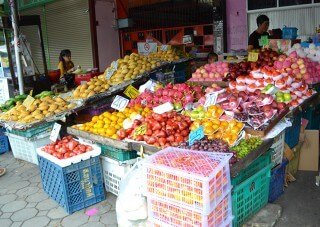 A rainbow of fruits! 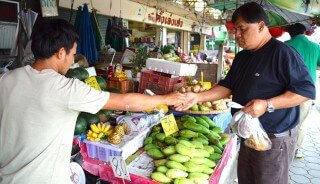 Fruits and vegetables cost significantly less than in the United States. 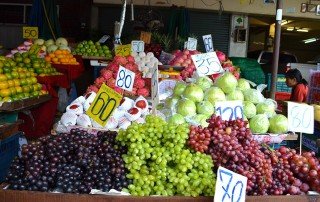 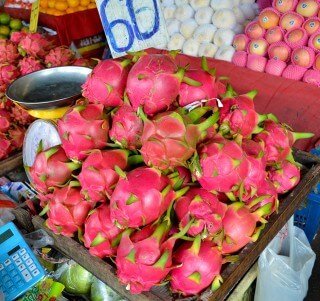 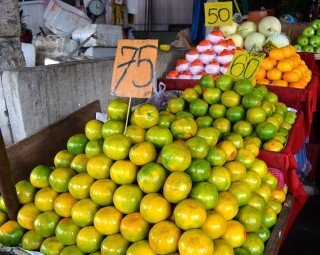 These gems offer rich, bursting flavor and are perfect as or with salad dressing. 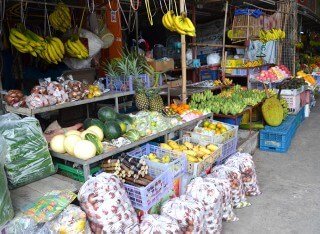 Enough fruit for a few days of enjoyable monomeals. 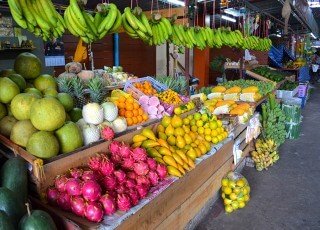