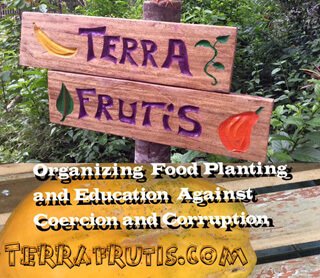 Jay Kaiser, a.k.a. Jay Yogi, is a chef of fermented raw foods and founder of the raw vegan superfood community Terra Frutis. Jay grew up on an organic farm in Washington state, and after serving a brief stint in the military, he attended Long Beach State University, where he obtained a bachelor of arts degree in biology, and then Cal State University at Dominguez Hills, where he was awarded a master of science degree in cytogenetics.

Burned out by too much microscopy work, Jay ran his own software company in the 1990s. This career later gave way to real estate development, and, in 2010, raw food cheffing, reflexology and holistic counseling after studying under good friend and mentor, Lou Corona, an advocate of the four principles of cellular communication, environment, nutrition and exercise. Check out Jay’s recipes by friending him on Facebook and keep up to date on all progress at Terra Frutis.

Brian’s note: I began 10 sentences with targeted words, presented in boldface below, that serve as conversation starters and asked Jay to complete the thoughts in this condensed “interview.”

I went vegetarian around the age of 37 to help combat the arthritis and joint laxity I was experiencing. Growing up as a kid on an organic farm (we used ground-up potato bugs as our pesticide) in Washington state, I took good food for granted and never guessed that anyone would intentionally poison others for profit until I started manifesting severe arthritis after spending 21 years in Southern California from the age of 16 to 37. During that time, my diet consisted mainly of Top Ramen, meat, potatoes, beans, cheese, milk, rice and some occasional greens and fruit with a few side trips to the local El Pollo Loco.

My parents had not taught me the biomechanics of all that wonderful natural food we had been growing, so I assumed that all food I ingested would be magically converted by my body into something nutritious even though I began to almost immediately suffer from high blood pressure and hemorrhoids throughout my 20s. Even after graduating with a B.A. in biology and M.S. in cytogenetics, I still had no clue as to the No. 1 longevity enhancement factor: a good diet! All the schools back then and some even today are pretty hush-hush on the nutritional topic as many receive funding in some form from pharmaceutical companies.

As I entered my 30s, I started noticing hair loss and arthritis as my enzyme deficiences and toxic buildup grew. Little did I know that most people who eat cooked and dead food have exhausted their enzyme “bank” by the age of 27! After which, your body begins to struggle in an uphill battle to produce enough pancreatic enzymes to assist in the digestion of all the high-temperature-exposed, rancified fats and proteins I was subjecting myself to. I struggled on in this same state until my arthritis and joint laxity increased as to become painful. Unfortunately, people respond to pain faster than any other sensation, so at the age of 37, I finally put two and two together and figured diet had to be the culprit.

In a Nutshell: Jay Kaiser

Meat was the first thing I eliminated as I had never liked it much to begin with. I, of course, substituted it with about half a block of tofu per day fried up with some eggs. After about two years of tofu, I noticed that not only did this not help my arthritis, it further inflamed my joints to the point where I felt, at times, as if they were on fire! My skin started itching, too, and the tips of my fingers grew sensitive and inflamed to the point where I thought my nails might fall off! I knew it wasn’t normal to feel like 105 at 39, which I was by this point, so I read up on tofu and learned that it is a GMO product that contains high phytic acid levels and enzyme inhibitors that significantly decrease mineral and nutrient uptake.

Going raw vegan around the age of 41 was a quantum leap for me in my health and fitness. My itching and finger pain were indicative of candida overgrowth, so I tried rubbing anti-fungal cream on my nails and skin with no success until a good friend pointed out that my blood was unclean and that only a diet of unprocessed food such as fresh fruit, vegetables and sprouts were key. After eating a year this way, I did notice a little improvement in my joints, though my candida still caused me severe pain and discomfort.

I had been going to a nearby raw food restaurant called Au Lac, at which a man by the name of Lou Corona would speak at every Tuesday in a banquet hall separate from the restaurant. I finally attended his seminar and was blown away by how strong and vibrant he was, being in his late 50s, and how he looked like he was in his mid- to late 30s! I immediately began applying his four principles of positive thought, lymphatic workouts (that is, yoga, rebounding, hot-cold showers, acupressure), outdoor contact and grounding with nature and 100 percent raw living foods such as his almond “yogurt” and lemon ginger blast supplemented with enzymes, probiotics and proteins. Within weeks, I noticed a decrease in my arthritis and other candida-related inflammation, and after a couple months, not only were all my symptoms gone but I could do splits again at age 41 just as if I were 20 again!

Something I discovered about myself is that my body actually craved raw living foods in the form of fermented seeds, nuts and greens, and even though the taste was beyond fantastic, I found that only a small portion at a time is needed to satiate me due to the greater absorbabilty and nutrient density.

I feel focused, alert and alive with unconditional love for nature and everyone around me!

My introduction to yoga began quite unpleasantly back in about 2000 in a bikram studio where the instructor would not let me leave the 1½-hour class one hour into it even though the 110-degree temperatures were causing me undo discomfort during our strenuous activities! I did not try this again until I met Lou. I now practice yoga twice a day for 15 to 20 minutes to keep my lymphatic system circulating.

Being in the present is crucial as seen here: When The Dalai Lama was asked what surprised him most, he said “man.” I quote: “Because he sacrifices his health in order to make money. Then he sacrifices money to recuperate his health. And then he is so anxious about the future that he does not enjoy the present; the result being that he does not live in the present or the future; he lives as if he is never going to die, and then dies having never really lived.” In other words, life is not the amount of breaths you take; it’s the moments that take your breath away.

At Terra Frutis, all raw vegans are welcome to live rent- and pollution-free and on food grown with their own hands in a community where all have an equal say in the running of the community. Knowing that something as simple as diet could provide a cure for all disease really motivated me to want to spread the word as well as seek a cleaner environment for all to share in. So I decided to venture down to Vilcabamba, Ecuador, called the Valley of Longevity, where many of my raw foodie friends were living. I immediately fell in love with the clean water, air and climate and began to search in earnest for a property large enough to support a raw vegan community.

With the help of my “son,” Jason Kvestad, we stumbled upon 300 beautiful acres of riverfront land a few hours from Vilcabamba that we call Terra Frutis (land of fruit). In the past year, with the help of volunteers and WWOOFers, we have planted hundreds of fruit trees such as durian, rollinia, jackfruit, papaya, lime, sapote, cempedak, coconut and many others. Wild banana (six different types), lemon, cacao and papaya were already growing all over the property.

My main message is to get people to live self-sustainably via permaculture in a community like Terra Frutis or one of the many others popping up around the world. Peaceful harmony and coexistence with nature is crucial if we are going to survive as a race.

The most incredible fruit for dessert is ripe durian with its butterscotch custard-like flavor.

One special thing about Terra Frutis is our Rio Bomboiza, with water so warm and crystal clear you can bathe or even drink out of it!

My goal in life is to provide a refuge for all raw vegans to enjoy a natural experience at Terra Fruitis. With our perfect year-round weather, crystal-clear streams for drinking and bountiful gardens, I believe we could eventually support a community of hundreds—if not thousands—of raw vegans! I encourage all who wish to live pollution- and rent-free to come join us so we can help you build your own tree house or hobbit hut of bamboo! 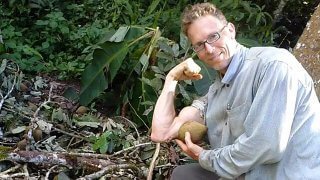 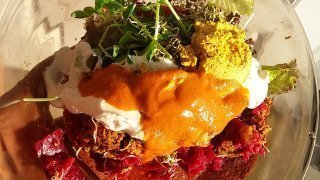 1 thought on “Jay Kaiser: ‘My Goal Is to Provide a Refuge for All Raw Vegans’”