I completed 300 push-ups on Sunday, achieving a goal I had set after doing 250 push-ups seemed reasonable. Years ago, I never imagined in my wildest dreams that I’d be able to do this many push-ups in a workout. I am simply amazed at what I’ve been able to achieve with my workouts in the past several weeks and have my Fruit-Powered Lifestyle to thank for helping make this possible.

In 2014, most days I did about 60 push-ups, which included 20 close-handed push-ups. Come the earliest days of 2015, I decided to increase the number of push-ups as well as chin-ups and pull-ups I did. This decision was partly driven by a desire to get stronger and partly driven by a desire to put on some pounds. (I’m back to eating 4,000 calories a day, and taking my workouts up a few notches enabled this to happen.) I went up to 80 and then 100 by January 11. At this time, my goal was to do this many push-ups practically daily. 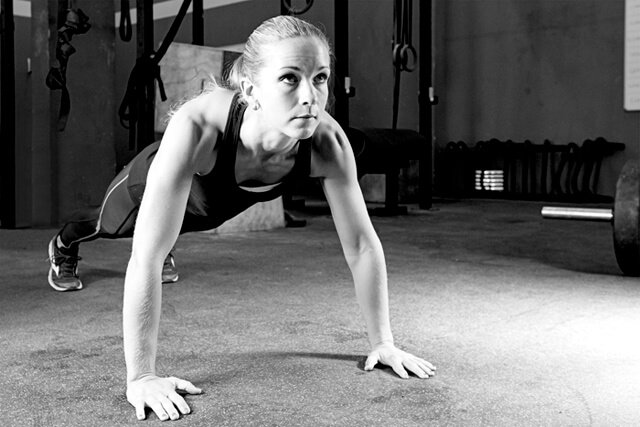 I hit a stretch in which I couldn’t give my all to my workouts, based largely on the Egoscue Method‘s stretches and bodyweight exercises, which I’ve been practicing for five years. Come February 22, though, I added 20 more push-ups to my workouts. At this point, my goal was to do 120 push-ups every other day while doing half as many the other days. On days I did 60 push-ups, I added more chin-ups and pull-ups to my workout.

By March 11, now unable to do chin-ups or pull-ups because of a move, I decided I would focus on push-ups for a period of time until I got a portable Trapeze Rigging bar for doing chin-ups and pull-ups. Over these 33 days, I would go from doing 150 to 300 push-ups, increasing the number I did every time I had an opportunity to put in the time for a marathon-length workout.

Powered by a diet rich in bananas, other fruits, greens and a healthful amount of fats, my body was up to the task. (“Where do I get my protein?” Eh.) My mind, focused on a steadily rising goal over this month, keyed in on the task at hand during each workout. Each morning and at other times throughout the day, I would visualize myself breaking through the previous workout’s push-up ceiling. I could see myself going through the motions and getting the job done.

I added a twist on March 12: diamond push-ups. The day before, Joan Adams, owner and director of Egoscue’s Philadelphia office, recommended I bring my hands so close together such that my index fingers and thumbs could form a diamond shape while doing close-handed push-ups. I would kick start every succeeding push-up routine with 20 diamond push-ups. I’ve since explored dozens of other variations on the traditional push-up and am eager to experiment, now that I’ve hit a mark I’m proud of.

I recall my arms feeling like absolute jelly during the final 20 push-ups to take me to 220. This feeling persisted six days later, on April 4, when I reached 240 push-ups. It’s as if my body’s memory knew that I was in uncharted waters. I completed these push-up routines in a shave over 30 minutes. I realize my times are high, especially in comparison with Korey Constable‘s workout, but trust that I can trim my time. The next workout was interrupted slightly, extending the time to 45 minutes, making it easier to crack through to 260 push-ups compared with my two previous workouts.

As far back as February or as late as mid-March, I thought 250 push-ups would be an ideal goal. Very soon afterward, 300 became my magic number, and a related goal was to achieve this by the last day of spring, June 20. At the rate I was going, however, I’d knock this out well more than two months early. I could see myself having an opportunity to hit 300 on April 15, but when I began my workout April 12, I decided to go from 260 to 300, representing my largest increase in number of push-ups, this very day. During the first 100, I felt heavy, as if I was getting the “rust” off. The next 70 were a breeze. I then settled in, eyeing my goal, for the next 130, and paced myself. By the end, I was doing only five push-ups, taking a few quick deep breaths, and doing another five. I finished strong, however, with a 10 push-up set. 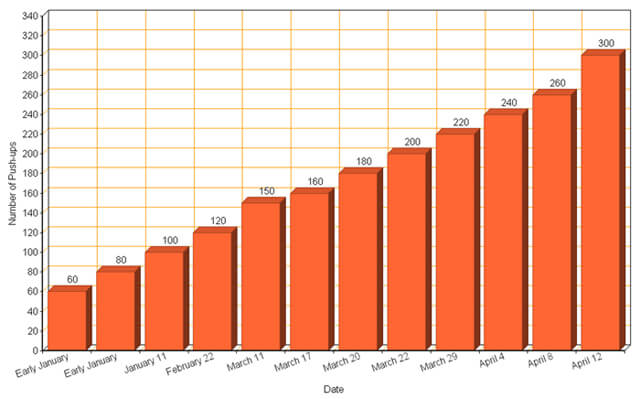 By doing 300 push-ups, I felt as if I had gotten somewhere but knew that this new territory would lead me to branch off so I can steer some attention back to chin-ups and pull-ups along with other exercises. I also decided, in the interests of saving time, I’d start making my push-ups harder to do by introducing variable positions, wearing a weighted vest, propping my feet up and/or concentrating on a specific Egoscue Method E-cise: the supremely challenging yet very fun roller coasters.

Along this journey, I checked in to learn how many push-ups former pro football running back and mixed martial artist Herschel Walker still does. The range is mind-blowing: 750 to 1,500! He also does 3,500 sit-ups. The man looks a youthful 52 and eats just one meal a day.

One of the best parts about this experience is knowing that I have it in me to continue to climb heights in push-up land. Part of me wants to carry on to reach 500, take a look at the scenery and decide whether to keep stepping up my game. Perhaps, with variations, I might crank out this many push-ups one day.