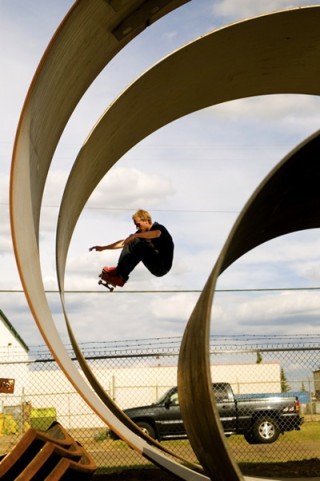 Chris Kendall grew up in Saskatoon, Saskatchewan, on a self-described standard American diet that included fruits and vegetables as well as meals of pizza and McDonald’s hamburgers. When he was 17, he moved out to pursue a skateboarding career and began eating cheap meals such as more McDonald’s fare, TV dinners, dollar-store burritos plus potatoes, rice and eggs. He also began consuming alcohol, cigarettes and marijuana.

“I just progressively felt worse and worse and worse until I got to the point when I was 19, living in California, eating strictly TV dinners and frozen burritos—five for $1—until I seriously felt so crappy I didn’t even want to walk down one flight of stairs to go skateboarding,” said Kendall, 32, whose nickname is “The Banana Commander.” “I was depressed all the time, my joints hurt—I knew something was up. I really needed to get my lifestyle changed.”

Chris Kendall began exploring and discovered a yoga book and Fit for Life by Harvey and Marilyn Diamond. The latter book served as his introduction to vegetarianism, Natural Hygiene and food combining. Over five years, Chris Kendall went vegan and transitioned to a whole-foods diet and realized health improvements. Something told him he could feel even better, though.

Then a student at the Canadian School of Natural Nutrition, Chris Kendall experienced a life-changing moment when he met Dr. Doug Graham in 2004 at a health festival. Graham exposed Chris to a low-fat raw vegan diet, sometimes called 80/10/10, and all its benefits, from increased energy and mental clarity to superior athletic performance.

“I went to every talk he went to,” Chris Kendall said about Graham. “What I was looking for, he had. He was glowing, and his information that he was sharing just really made sense on every level. It wasn’t from the intellect as much as common sense and heart. It really hit me, and the next day I went raw … . Since then, it’s just been an upward climb to higher levels of fitness and health and implementing more aspects of a healthy lifestyle.” 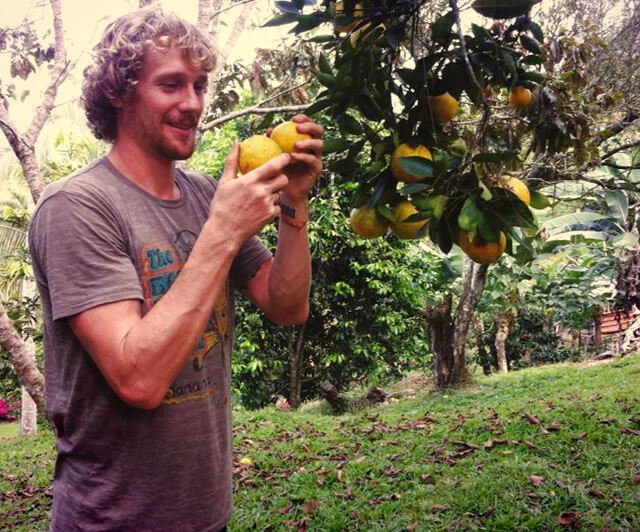 Chris Kendall counts cherimoyas, cherries, figs, mangos, peaches and persimmons among his favorite fruits but maintains a simple, grateful philosophy for what feeds him.

“My favorite fruit is whatever’s in season and in great quantity in my hand,” he said. “When they’re in season and they’re at peak quality and ripeness, I don’t feel like you can get any better. As my needs, as my tastes, as my desires change, so do my favorites.”

Half his days, Chris Kendall eats just two meals: lunch and dinner. His breakfasts and lunches are monomeals, or meals comprising just one kind of food such as fruit. Dinner for him regularly comprises 2 to 5 pounds of subacid or acid frut such as oranges or pineapple followed by a large stew. This stew sometimes contains eight to 12 medium-size tomatoes, one or two zucchini, a bunch of bok choy and a few heads of cilantro. Chris Kendall adds mangos to this stew, chopping up some into cubes and blending the rest with tomatoes and greens.

“This really, really satisfies my savory kick,” he said.

With physical fitness, skateboarding and yoga are the exercise vehicles Chris Kendall has gotten the most miles out of and continues to utilize. He’s been skating since he was 5 and has pushed his body to its limits, hurling his body down flights of stairs, rolling each ankle 100 times and ripping ligaments in his knees. He’s even broken his wrists, ribs and back. All this said, Chris Kendall feels at times as young as he did when he was 16 with the exception of injuries accumulated over his 27-year skateboarding career.

Chris Kendall began exploring yoga in 1999, starting with Hatha and power yoga and moving on to Kundalini yoga, a spinal-based movement yoga. Chris Kendall married yoga styles in creating Kendallini yoga, which features parts of power, Kundalini and Tibeten rights yoga forms plus martial arts and calisthenics. Kendallini yoga is what he practices and teaches the most via Skype or in parks.

Chris Kendall follows Doug Graham’s philosophy of “No routine is the best routine,” he said. Whereas Chris Kendall once skated many hours every day and practiced yoga for an hour every day, he now is content to do what he feels each day. He generally skateboards a couple of times a week or month. With yoga, he practices some movements every day over five to 20 minutes but completes a full hour only when he teaches, a few times a week or month. 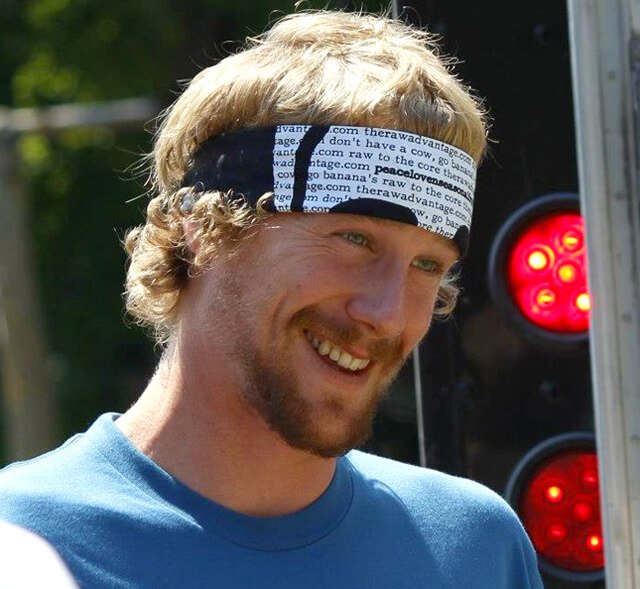 “Yoga’s definitely influenced my life a lot,” he said. “It’s definitely a really great mindful practice that can bring a lot more conscious breath, conscious movement and the joining of that breath and movement. It’s really great for mindfulness as well, of course, of better oxygenation of all the cells in your body. It really helps with all the different aspects of fitness that can compliment many other activities.”

Chris Kendall’s strength, stamina, flexibility and ability to heal have increased a “hundredfold” on a fruit-based raw food diet compared with his previous lifestyle, he said. The diet itself, so rooted in human beings’ nature and physiology, has become a cinch to practice and revealed other benefits, he said.

“For me, the biggest changes over the long term have just been continued growth in the confidence and ease in applying the diet—not even having any questions anymore, just knowing that it’s 100 percent the best way for me to go as I continue to grow and just feel better and better,” he said. “Strength, endurance, clarity—all definitely climbing year by year, each and every little kind of thing that you may not think about but then all of a sudden notice, ‘Hey, my socks don’t ever smell anymore’ or ‘I don’t have that joint pain anymore’ or ‘I don’t even think about cooked food anymore.’ It just becomes an easy breeze.”

Shop All Chris Kendall Products in the Fruit-Powered Store

Chris Kendall Spreads the Word About a Raw Food Diet

Chris Kendall grew to share information on raw food in an unobtrusive way and launched TheRawAdvantage.com, a resource for raw fooders, in 2008 to share the benefits he’s experienced by leading a raw lifestyle. Chris Kendall wrote 101 Frickin’ Rawsome Recipes, featuring all 80/10/10 recipes made from one to five well-combined ingredients.

“Within that first week of going fully raw, I was so charged up, I felt so light and so connected with everyone, connected to my source and so enlivened and loved that I said, ‘Wow, this is all I want to do, this is more important than skateboarding, this is what I want to pass on,’ ” Chris Kendall said. “This feeling is something that needs to be shared, and I also kind of had a feeling that, ‘Hey, if I’m going to do this, I need to do it full-on to make sure I’m completely well-versed in the lifestyle that I can be confident I’m doing it 100 percent and preach what I’m living.’ ”

Chris Kendall’s raw vocation morphed from a focus on blog posts to videos, the latter of which offer a fun, refreshing take on diet, health and fitness. He then began offering his services as a consultant—over Skype, in person and even living with a transitioning raw fooder. Chris Kendall also began running retreats and recently oversaw three retreats, two at Farm of Life in Costa Rica and one at Casa Axis Mundi in Mexico, with Megan Elizabeth.

Chris Kendall’s Advice on Transitioning to a Raw Food Diet

For some time during his own transition, Chris Kendall found himself experiencing many emotional changes before finding himself at ease in a variety of situations. Chris believes the food part of a raw food transition is the easiest part to master and that the emotional part “makes the biggest waves.” For this reason, Chris Kendall suggests folks move at a pace that’s comfortable to them when transitioning.

“If you know your goal is to be raw, and that’s what you really want to do, go for a trial period,” he said. “I think it’s tough when people say, ‘I’m going raw and staying raw forever.’ I know I did that myself, and that led to my [slipping] back on it, feeling really guilty and bad about it. Whereas, instead, it’s like ‘I want to make some positive changes, I’m going to eat a lot more raw food and maybe I’ll try for a week or a month where I eat all raw but at the same time be really easy with myself because it is a really big lifestyle change.’ It brings up a lot of emotional issues, it brings up a lot of social issues, it can bring up even some spiritual issues, and I think that an adult-sized serving of compassion and love and gentle acceptance of self is really important in applying in a raw food lifestyle.”

Chris Kendall also suggests transitioning raw fooders seek out support, guidance and good information. He recommends Graham’s raw food book The 80/10/10 Diet and even enlisting the help of a consultant such as himself.

“Oftentimes,” he said, “just talking with someone for a half-hour or an hour or so that has gone through it and who can really answer those little questions that maybe aren’t quite as clear as you’d like them can make a huge, huge difference.”

Watch Chris Kendall in ‘Happy World Vegan Day/Month: Why I Love Being Vegan #2 :)’