Every few weeks, I get a reminder about the need for greater education when it comes to instructing people to recycle and properly dispose of batteries and electronics.

A recent reminder came when a friend left two fluorescent light tubes in a bag to go out with the rest of her garbage. These fluorescent tubes contain small amounts of mercury, according to an article published on Earth911.com, a popular website known as “The Recycling Authority.” Mercury can be hazardous to the health of living beings and the environment if released into the regular waste stream. These tubes are considered “universal waste,” a category of waste materials designated as “hazardous waste” but containing common materials by the U.S. Environmental Protection Agency. Batteries also fall under universal waste.

Earth911.com offers a handy, interactive recycling locator map to learn where to properly dispose of fluorescent tubes, but only 14 locations pop up, with some as close to me as a 45-minute car ride but others as far away as the West Coast. Clearly, more options are needed to serve folks from the Pacific Northwest to Florida’s Everglades and everywhere in-between!

How about batteries—single-use and rechargeable? (Quick note: Did you know that 3 billion batteries are discarded annually in the United States, with the world figure topping out at a whopping 10 billion?) Coincidentally, we’re just a week away from National Battery Day. Celebrated on February 18, this date marks an opportunity to recycle your old rechargeable batteries, according to Call2Recycle.org. An interactive map on this website brings up 31 locations near me, with most locations being chain stores such as Best Buy, Home Depot, Lowe’s, RadioShack, Sears and Staples as well as a few mom-and-pop companies.

Further browsing on Call2Recycle’s website shows a long list of accepted items—namely many different kinds of batteries and cell phones—but many kinds of batteries don’t make the cut. Nor do cell phone chargers or other electronics such as computers, tablets and MP3 players.

As for single-use batteries, shockingly it is legal to toss them into the trash in every state except California. The Mercury-Containing and Rechargeable Battery Management Act of 1996 phased out the use of mercury in alkaline batteries, “making them less of an issue when disposed in landfills,” according to Earth911.com. This website recommends recycling these kinds of batteries during household hazardous waste collections in areas near you and encourages folks to visit local municipal websites for details.

These examples shine a light on what is wrong with this setup: People need to refer to too many sources to find out where to recycle what. Until government, from federal all the way down to states and local municipalities, and participating companies adopt common language and recycling and disposal standards, many people are going to continue to leave cell phone batteries and laptops for trash pickup. This kind of coordination and action is needed now in a major way!

Only in 2013 did Pennsylvania’s government, for example, make it illegal to trash electronics such as computers and televisions, which contain health-damaging lead, cadmium and mercury. This didn’t stop one person from leaving an old standard-definition TV outside a building near the Lansdale, Pennsylvania, raw food café Arnold’s Way for a few weeks last year—or my father from dumping a busted computer into a garbage can. 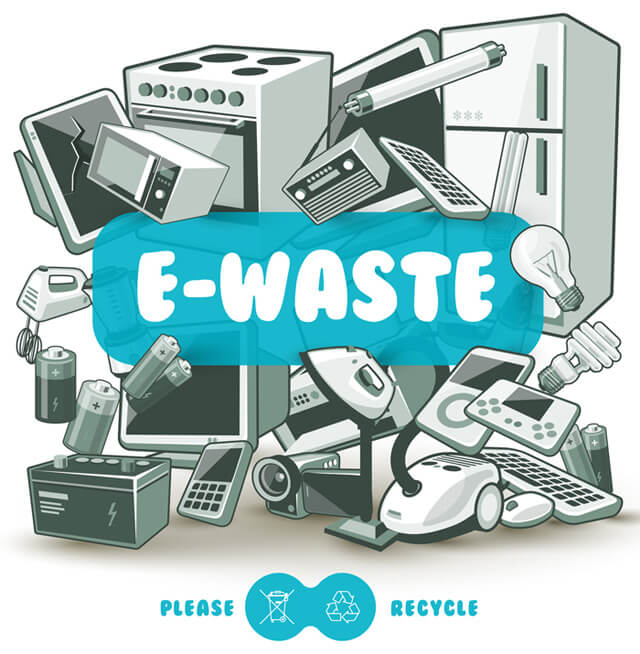 A riveting 60 Minutes story in 2008 followed the trail of electronic waste from U.S.-based Executive Recycling to China. Cameras revealed a mountain of cathode ray tube televisions and computer monitors dumped by a waterway. The devices were supposed to have been recycled properly. The camera also caught sight of sickly people, whose health was ravaged by lead poisoning.

The problem with e-waste is that it is the fastest-growing component of the municipal waste stream worldwide.

Our environment and world need all the healing they can get. Beset by development covering chunks of the planet in concrete, air and water pollution, chemtrails raining aluminum, animal agriculture, endless streams of garbage and skyrocketing mounds of electronic waste, the home for all of us—all the globe’s wonderful, beautiful species that keep the dance of life in motion—is a place that deserves love, respect and attention.

Until recycling a fluorescent light tube, cell phone battery, HDTV and Chromebook can be done easily, all ideally in the same place, for free or for nominal fees, I encourage you to collect household hazardous waste for delivery to places equipped to do the job correctly and safely.

Our Mother Earth thanks you!