More than 20 million people worldwide have viewed Fat, Sick & Nearly Dead, arguably the most-talked-about health film of the past decade, and the biggest takeaway I have from watching the sequel film at a special advance screening September 18 is that America, home to some of the fattest and sickest, is ready for a fruitarian diet.

In watching this film, we see video testimonial after testimonial of lost weight, increased energy and lives gotten back on track. One man takes filmmaker and star Joe Cross to a supermarket where he plunks down about $35 for ingredients to make two juices. If all these people have gladly thrown down some big coin for a juicer and the fruits and vegetables to make juices regularly, surely they must be ready to eat a watermelon for breakfast and green smoothie for lunch and other raw foods! Compared with juicing, enjoying a low-fat raw food diet is faster, easier, cheaper and, to boot, more satisfying. It’s also in line with our design. 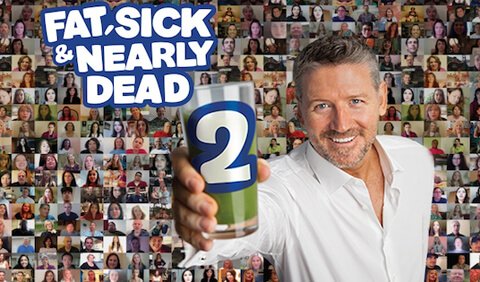 A diet rich in juices is simply not a sustainable diet. We are designed to eat whole foods—fiber and all—not stripped-down foods wrung of roughage to juice forms. Cross is living proof of this. A graph during the film charts his constantly yo-yoing weight. He admits that every time his weight starts to climb to 250 pounds, he “reboots,” his term for going on a juice feast. The result is a cycle Cross—and some of this fans and followers, we soon find—can’t break out of.

The star drops in on four men featured in the first film, none of whom are at their ideal weights. One man went from a 50-plus-inch to 40-something-inch waistline. Two men again featured in a restaurant scene, this time without a now-grown teenager, concede that they took steps to improve their diets but that they had not made a single juice. (Why did Cross choose to spend time with them in this film?) Most notably, one-time trucker Phil Staples was back in the neighborhood of his original weight before his first extended juicing reboot. He emphasizes how he needs community for support to flourish.

Quite simply, Cross has done an outstanding job in making juicing practically a household name and bringing the very idea of health improvement into the national consciousness because of his first film, a fun, spirited piece. The man, however, has not fully explored our natural, species-specific diet. I’m certain Cross has experienced moments of tremendous insight and vitality during his many reboots, but I wonder whether he has pondered what eating only raw fruits and vegetables could do for his body, mind and spirit. Surely, Cross has met fruitarians who’ve extolled the wonderful benefits of a fruit-based diet. I was in a screening room in Philadelphia in October 2011 when Irene Bojczuk told him about her diet, and Don Bennett told me he chatted with Cross about his diet.

Whereas Fat, Sick & Nearly Dead elicits fist-pumping feelings—à la Rocky—in which you might find yourself rooting for Joe and Phil, this second film had me doing something else with my hand: scratching my head. Cross tells a gathering of dozens in Austin, Texas, that he eats a diet of 40 percent fruits and vegetables by calories, with each of the other 30 percent of calories coming from animal and processed foods. He even says it’s OK to eat at McDonald’s twice a month. The whole time I watched, I thought of ways to make a movie on a Fruit-Powered Lifestyle! It took about a full hour into the film for the word “smoothie” to even come up. I think “vegan” was uttered just once. Too much emphasis is on low-calorie vegetables, not fruit, in this film.

Cross might not be ready for a fruitarian diet himself, but I think that with proper promotion, education and experimentation—plus love and patience while transitioning and with the support of loved ones—many Americans would gladly welcome a fruitarian lifestyle, with some eating cooked plant foods for dinner. To all those sharing their experiences on a fruitarian diet via websites, videos, social media and in person, the world is thankful and changing one person at a time.

The shift is happening. Be sure of this! 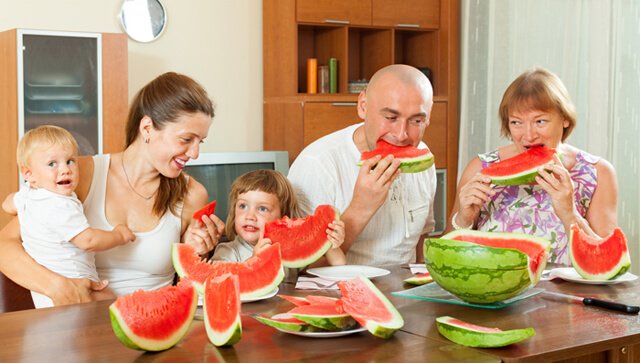 2 thoughts on “America Is Ready for a Fruitarian Diet”