‘Every Year, I’m Just More Vital Than the Year Before.’

Andrew Perlot has ridden a gigantic shimmering wave along his raw food journey, taking him from his native Connecticut to Southeast Asia, where he spent two years exploring a range of locales and tropical fruits, and, recently, to Austin, Texas. The 28-year-old former newspaper reporter launched Raw-Food-Health.net in March 2008 after his first year committed to a 100 percent low-fat raw food diet, which enabled him to lose weight and reverse colitis.

Andrew grew up eating a healthier-than-average version of the standard American diet but saw weight gain, topping out at 220 pounds at 17, and had frequent migraines. He first noticed symptoms in middle school of what would later be diagnosed as colitis, an intestinal disorder that affected him for about a decade.

Seventeen turned out to be an age when Andrew learned he could change his health destiny. He registered for a Ninjitsu class and began to lose weight. Soon after, he cut out dairy and lots of junk food, prompting an increased weight loss.

“I just realized for the first time that I could affect my own reality, that I was capable of making changes that would radically change who i was physically and mentally,” he said.

Within a year, Andrew had shed 30 pounds and then shifted to a cooked vegan diet in college. He lost another 10 pounds but still experienced migraines. His colitis condition worsened, and he began keeping a detailed food log. Andrew discovered that certain foods triggered spikes in his colitis symptoms.

“When I presented this to my doctor, he basically told me: ‘No, you’re wrong. This isn’t the case. It’s just a coincidence. Your colitis is going into remission and coming out again,’ ” Andrew said. “… That kind of crossed a line for me.”

“When it was suggested to me in that pamphlet that I replace the starches and grains with fruit, a light clicked on in my head,” he said.

In early 2005, Andrew went 100 percent raw, eating only bananas for a month because his digestive system was compromised from colitis. He noticed his migraines and colitis symptoms began to recede after the first month raw. By his second month raw, when he introduced vegetables, these symptoms vanished.

Like many, Andrew found the pull of cooked food tugging at him. Over about two years, Andrew experimented with cooked meals but learned by 2007 that, to feel his best, he must stick to being 100 percent raw.

Andrew has made tremendous strides in fitness while leading a raw vegan lifestyle. He said that he could run barely more than a couple of miles when he went raw but that he ran a marathon only a year later. He’s run as many as 36 miles at a time. Over the past five years, he’s spent much time running and practicing yoga. Lately, he focused on building muscle aggressively before taking to Austin playgrounds to do lots of body-weight exercises along with biking and swimming in spring-fed pools. He even climbed a persimmon tree on the University of Texas campus, helping himself and friends to free meals.

“This past year,” he said, “I’ve been investigating some different areas like, ‘Can I climb a rope? Can I climb a rockface? Can I shimmy up a pole? Can I grab onto it and pull myself off the ground and hold myself vertical with that?’ ”

All this movement would’ve been foreign to Andrew when he was 16.

“I love to move my body,” he said. “When I was younger and overweight, the idea that I would ever love to exercise seemed absurd. Now, if you wanted to punish me somehow, you would probably just lock me in a small room and refuse to let me move at all. You could give me a TV, which would content most people, but I’d go nuts.”

Andrew said he exhibits near-bottomless energy and thinks more clearly as a fitness-focused raw vegan compared with his former self on the standard American diet. He also said he never gets sick, handles stress better and is able to work for longer periods of time without requiring rest.

One of Andrew’s greatest discoveries while raw—even after almost eight years raw and almost six years at 100 percent raw—is that he’s yet to “peak” in his energy level and feeling of well-being.

“My body, it seems like it never gets tired,” he said. “It never falls apart on me. I have continuously felt more vital. I don’t know when this increase is going to stop, but it seems like every year, I’m just more vital than the year before.”

Because of his extensive travel, Andrew has tasted lots of different fruits many have never heard of. An ideal food day for him in the United States would be peaches for breakfast, persimmons for lunch and a salad with two to three heads of lettuce and a dressing of freshly harvested tomatoes, half an avocado and some basil or oregano. In Thailand, however, Andrew would go with Nam Doc Mai mangos for breakfast, Namwah bananas or mangosteen for lunch and a salad with water morning glory, a tropical greens variety, with another homemade dressing for dinner. 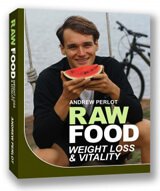 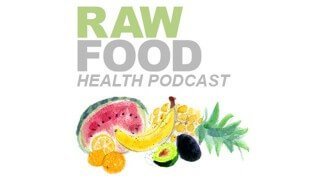 Listen to Andrew’s interview with Brian Rossiter on the Raw Food Health Podcast!