Kristina Poudyal grew up in Slovakia, is half-Czech from her mother’s side, attended school in Austria and then moved to the United States for six years. After going raw vegan in 2015, she spent six months in Vietnam and five months in Nepal teaching English. She is now based in Vienna, Austria, with her Nepalese husband.

Kristina Poudyal is a certified detox specialist and combines her knowledge about food with the ancient yogic practices to inspire people to take their health and life into their own hands. Follow her on Facebook, Instagram and YouTube.

Sometimes the saddest days are a blessing in disguise. And that is exactly what happened in my life. When I was 10 years old, my mom was diagnosed with breast cancer. She went through chemotherapy and radiation, lost her hair and her breast and, after five years, the doctors said she was officially cancer-free. Her battle was not over, however. After a year or so, she lost her voice, and the doctors couldn’t figure out what was going on. It turned out that the lost voice was due to metastases in her throat. A female doctor called me into her office on the day of my 18th birthday and informed me that my mom had only a few days to live. She passed away 13 days after that at the age of 50.

My world was shattered, as she meant the world to me, and now she was gone forever. As if that wasn’t hard enough for an 18-year-old girl, the host parents I lived with during my foreign-exchange year in the United States invited me to come back to live with them when they heard about the bad news. When I arrived in the U.S. a few months later, my host mom was already on her deathbed due to the same diagnosis as my own mom. I was suffering deeply and lived with undiagnosed depression for about five years.

A bright light finally came into my life when I stumbled on a documentary that changed my life forever. The movie Forks Over Knives showed living examples of people who reversed their illnesses, including cancer, on plant-based diets! I was extremely shocked that I was hearing such crucial information for the very first time in my life and immediately wanted everyone to know about this as well. My mom and I ate a standard Czech–Slovak diet based on bread, meat, dairy and eggs and very little fruit or vegetables. None of my mom’s doctors ever mentioned anything about her diet! So as soon as I finished watching the documentary, I knew I had to go vegan as I never wanted anyone to go through the indescribable grief I was going through.

Buy These Inspiring Documentaries in the Fruitarian Store

Ironically, prior to this, I started buying organic milk and eggs, and my asthma symptoms started to get worse as I was eating around four organic eggs and at least a half a gallon of organic milk per day. After watching that documentary, though, I swept my fridge clean of all nonvegan foods and stormed Whole Foods to get my very first almond milk. I got myself a juicer as well and, within less than two weeks, my asthma symptoms vanished completely. I was beyond excited to trash my steroid inhaler that I was told I had to take for the rest of my life. I continued my own research about the plant-based lifestyle and decided to stop taking birth-control pills, which I had been taking for six years because of irregular and extremely painful periods. I also discovered juicing and the fruitarian lifestyle through Fat, Sick & Nearly Dead and YouTuber FullyRaw Kristina, who looked so energetic to me, and I felt like she was exuding health, that I knew I had to slowly but surely go raw vegan one day.

After a year and a half of eating a plant-based, high-raw diet, I went for a checkup with my gynecologist and found out that I had ovarian cysts. The doctor suggested that I start taking birth-control pills once again to “balance” my hormones. Having had watched so many documentaries about the pharma industry, I politely refused and asked her whether there was another way to heal. Her assistant son replied on her behalf while rolling his eyes: “Tsk! Everyone thinks they can cure themselves with diet these days.” So I went home and had an argument with my boyfriend, who thought I was going crazy for not wanting to eat cooked food anymore, but I really didn’t care about anything except for my own health anymore. If doctors never even uttered a word about my mom’s diet while people have healed by changing their diets, I knew it was a waste of time for me to rely on them for any help.

In a Nutshell: Kristina Poudyal

Here’s a snapshot of Kristina Poudyal’s favorites:
▪ Fruit: Honey mangoes, sweet melons, chempedak, honey bananas, durian, persimmons and grapes.
▪ Exercise: Angamardana, basketball and snowboarding.
▪ Book: Inner Engineering: A Yogi’s Guide to Joy by Sadhguru.
▪ Film: PK.
▪ Album: I don’t have a favorite album but one of my favorite songs is Alai – Wave of Bliss by Sounds of Isha.
▪ Place on earth: Tropical places with lots of sunshine and beaches and the Isha Yoga Center in India.
▪ Thing to do: Being in nature, learning Nepalese and traveling.

Going fully low-fat raw vegan was not such a huge change as I was already eating a low-fat Raw Till 4 salt- and oil-free diet, so I only had to swap dinners of rice and legumes for big salads with low-fat dressings. Since I was not able to stop myself from eating nuts once I started eating them, I also decided to completely omit them for the time being, as they caused breakouts. I was simply determined to heal the cysts as proof to myself that it is indeed possible to heal through my new diet. So after a year of eating a low-fat, fruit-based raw diet, I wanted the doctor to confirm the results of my “absurd” idea of healing with foods. I went for a sonogram, and once the same doctor confirmed the cysts were gone, I cried out loud, but her son did not have anything to say this time around. 😛

Not only was my physical health improving dramatically, I also started experiencing more happy days thanks to the shift to raw foods. I felt that food alone, however, was not directly addressing my depressive states connected to my mother’s passing. Luckily, my boyfriend and now husband pointed me toward spirituality. I was somehow drawn to this idea of his as his Nepalese roots seemed to have some hidden wisdom in their culture. With a good grip on my clean, high-vibe diet, I shifted my research toward spirituality and, soon enough, I was sitting in the Inner Engineering classical yoga program. Very quickly, my mental and emotional struggles were replaced by peace, joy and love thanks to a simple daily spiritual practice that I learned in the program. It was a huge support on my health journey as I was facing many uncomfortable social situations and pressure from family and friends due to my new diet. But thanks to the spiritual practice, something within me started shifting, and I was becoming more and more stable within me. After such a long time of not being able to genuinely laugh, I would feel blissful for no reason, I was able to handle tough situations effortlessly and the word “stress” was no longer a thing in my life.

“I no longer felt like people were victims of some unwelcome guest named cancer but instead realized that everything is cause and effect. What we sow, we reap.”
—Kristina Poudyal, a.k.a. “FruitbuiltKristina”

Thanks to my spiritual practice, I was able to also overcome the secret wish of having discovered this lifestyle earlier, as it could have saved my moms’ lives. Though my love for my moms will never cease, I feel that it all happened for a reason as it was a huge life lesson. If it weren’t for my mom’s breast cancer, I would never have gotten interested in veganism, let alone raw foods. I would have kept on eating my morning cereal with milk, at least one bar of chocolate a day and, of course, I could not go a day without some form of meat on my plate. I would have never started caring about my health because I never thought my health issues were serious enough. I did not think it was a big deal to have asthma. Thanks to the fact that I witnessed both of my moms suffer the grave consequences of medical treatments for cancer that never actually helped them feel better, I realized that, if I did not want to end up like my moms, I had to take my health into my own hands. Thanks to their breast cancer, a whole new world of possibilities opened up to me. I no longer felt like people were victims of some unwelcome guest named cancer but instead realized that everything is cause and effect. What we sow, we reap.

Kristina Poudyal Focuses on a Range of Lifestyle Factors

There are, of course, other factors that I have learned to be important to my well-being such as exercise (I practice Isha hatha yoga, angamardana, cycling, playing basketball or working out at home), sleeping and waking up early, sunshine, fresh air, being in touch with nature through grounding, and having people around to support one another.

Though I feel I still have a lot of things to work on, I am finally thriving not just physically but also mentally and emotionally. Feeling more peaceful, loving and joyful every day is something that would not have been possible without fruit and yoga. These two things are simply the perfect combination for a fulfilling and blissful life.

Thanks to the seemingly sad beginning of my life story, I was able to discover the secret to health and joy thanks to fruit and yoga. I am able to help people today who are facing similar diagnoses as my moms were. I became a certified detox specialist and am planning to restart my YouTube channel to share all the amazing benefits of fruits and raw foods with the world. If you are interested, you can subscribe to my channel as I will be making videos in English, German, Slovak and Nepalese.

Watch Kristina Poudyal (“FruitbuiltKristina”) Talk About Why She Is Raw Vegan 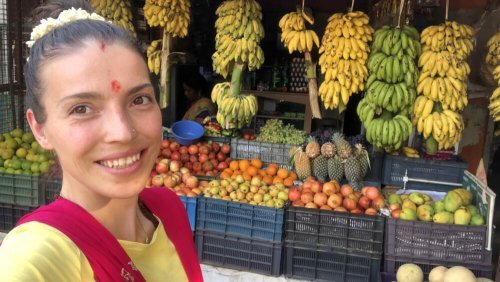 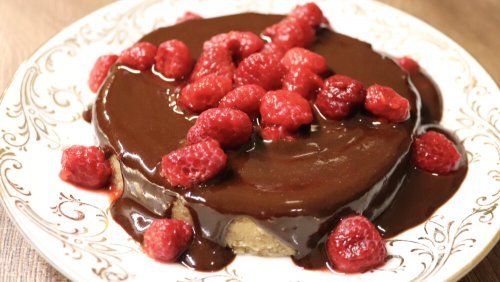 Mini-Cake With Raspberry
Appetizer Recipes to Party Dish Recipes
Explore all Raw Vegan Recipes
Enjoy This Illuminating and Inspiring Content? Show Your Love by Sharing!
💛 Complete the Circle of Giving by Supporting This Content! 💛
Shop in the Fruit-Powered Store Donate to Fruit-Powered

Kristina Poudyal grew up in Slovakia, is half-Czech from her mother’s side, attended school in Austria, and then moved to the United States for six years. After going raw vegan in 2015, she spent six months in Vietnam and five months in Nepal teaching English. She is now based in Vienna, Austria, with her Nepalese husband. Kristina Poudyal is a certified detox specialist and combines her knowledge about food with the ancient yogic practices to inspire people to take their health and life into their own hands.