Censorship Is Making It Harder Than Ever to Find Natural Health Content. Help Your Family and Friends Plus Fruit-Powered by Sharing!
💛 Complete the Circle of Giving by Supporting This Content! 💛
Shop in the Fruit-Powered Store
Donate to Fruit-Powered
The first alarm went off at 4 a.m. with the note flashing on my cell phone: “Take Yer Pills!” I have Hashimoto’s hypothyroidism and take medication each morning at least one hour before I plan to drive to “turn my brain on.” I was diagnosed in my very early 20s.

I rolled out of bed and immediately noticed that my left arm and left leg were numb. I shook them out, thinking I must have slept oddly on the left side. I hobbled over to the kitchen and took my pills with a glass of water with no major trouble swallowing and hobbled back to bed to sleep until my next alarm, telling me to “Get Up Now!”

At 5 a.m., I hobbled out of bed again to take my dog on his morning walk. I noticed that my left ankle was failing to support my weight and would buckle with each step. I shrugged it off, cut my walk very short and kept on with my morning routine. Showering and getting dressed took a lot longer than usual, making me late for work. I just couldn’t get my left arm to cooperate. What the hell?

I got in my car and started driving to work, already much later than my usual time. My left arm wouldn’t grasp the steering wheel properly. I placed it on the wheel with my right hand and told my left hand to tighten. The left hand kept sliding down off the wheel and plopping limply into my lap. I finally allowed myself to admit that something might be wrong. The tears came pouring down my cheeks. I got myself together and convinced myself that this wasn’t happening. This was all just in my head. Oh, how right I was.

In a Nutshell: Rebecca Rosenberg

Here’s a snapshot of Rebecca’s favorites:

I managed to get to work in one piece using my right side. I hobbled to my desk and tried typing in my password on the computer and then realized that my left fingers were not responding at all. I couldn’t type! I’m an assistant, and typing is my livelihood. It hit me for real this time like a ton of bricks. Something was definitely wrong. Oh, god, what if I had a stroke? Strokes run in my family! I started sobbing at my desk. Luckily, my boss was there and heard me. She drove me to the ER.

I hobbled up to the ER front desk. The receptionist asked me why I was there. I broke down crying and said, “I think I had a stroke.” I was given an X-ray and CAT scan immediately and put under stroke protocol. Every test came back negative for evidence of stroke, so they sent me to a hospital with a top neurology department. Off I went in my first ambulance ride to be admitted to a hospital for the first time. 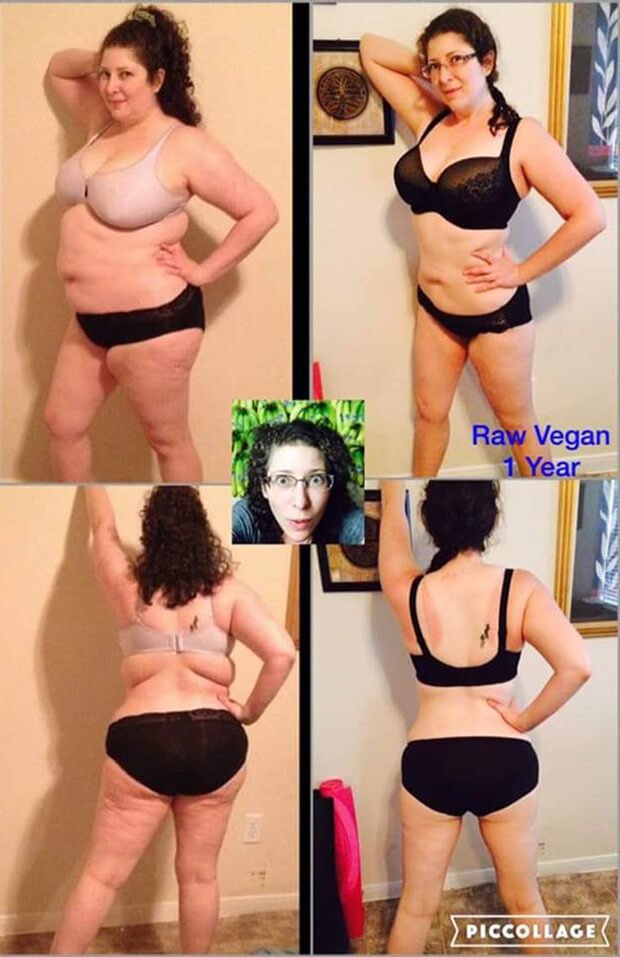 I ended up in a hospital on September 8, 2014, because I couldn’t control my left side from the neck down. The doctors initially thought I had a stroke even though I protested vocally that “30-year-old vegans don’t have strokes!” The neurologists reviewed my MRI and ordered a spinal tap to confirm the findings of multiple scars or multiple sclerosis (MS) on my brain. My highly elevated oligoclonal bands from my spinal tap fluids determined that my case was definitively MS.

My initial reactions were devastation, fear and panic. I pictured an early death. I wondered what I did wrong to deserve this. I also feared that I would be abandoned by everyone I cared about—unlovable and pathetic. I felt like walking off the ledge of the roof right then and there. After a few minutes of sobbing loudly after the doctor left my room, I made the decision to go on because I hadn’t done everything I wanted to do yet and wasn’t ready to resign myself to a life of constantly increasing disability and debilitation. I made a conscious decision to do everything in my power to heal and help myself, no matter what that meant. I already knew from being part of the vegan community for so many years that this included going raw and fruit-based, as that was the best chance I could give myself for healing and disease reversal.

My unfinished business and sense of urgency pushed me to make the decision to not only survive, but to win the fight against my condition. I began my own treatment on Day 1 in the hospital. I ate only raw vegan food while in the hospital, thanks to a few angels for bringing it to me, and I also began working on my own physical therapy instead of waiting on the hospital’s physical therapist to show up (which was several days later). I dragged my left leg around the neurology wing of the hospital, learning how to walk again, and focused on touching objects or spots on the walls with my left hand. I cried a lot. I was unsuccessful in many of my early attempts but was determined that I would get better with practice by focusing on the reconnection of body and brain and allowing my body to heal itself with raw food.

I had to recommit myself to my reasons and goals every single meal of every day and, sometimes, more often than that to keep myself on track. My reasons had to be more important than my temptations. Fruit was the hardest for me. I have never been a sugar lover, and fruit was often too sweet for my tastes. I hated bananas and could only tolerate them when they were green. I loved savory and salty flavors and always craved hot Asian-style soups and noodles. I also loved vegan Mexican food, anything with tofu, any vegan processed junk food and, especially, vegan pizza. I cooked every day and loved very hot food, both the temperature and the spice. I had to refocus my creative cooking energies on creating raw food dishes that would mimic whatever foods I was craving at that time. Eventually, my taste buds changed and my fruit tolerance increased. Now I crave fresh, ripe, juicy fruits and even love bananas now, too. Everything became second nature once I got comfortable with the diet.

I stay exclusively raw and forever vegan. The closer I stick to a fruitarian style carb/protein/fat ratio of 80/10/10 or even 90/5/5, the better I feel and the more rapidly I heal. In addition to reversing the damage from MS, I have also reversed Hashimoto’s hypothyroidism (11-plus years), Benzo addiction/withdrawal (two-plus years, as prescribed), prediabetes/hypoglycemia (20-plus years), high blood pressure (15-plus years), high cholesterol (15-plus years), acid reflux (5-plus years), depression (lifelong), anxiety (lifelong) and panic attacks (10-plus years). I am medication free at last! I also lost 80 pounds so far, but that was just a fun side effect.

There is no profit for any industry in recommending low-fat raw fruitarian living as a legitimate cure except for our local farmers, who I love to support. The food industry and sick-care industry, including Big Pharma, have a hugely profitable partnership. These mega-industries would implode if people took care of themselves in the natural way. I believe much consideration is taken to ensure this doesn’t happen with marketing, government subsidies and social pressures to conform to traditions. All diseases are basically the same issue manifesting in different ways. Body toxicity is the root cause. If we remove the toxicity, our bodies can heal themselves. Another issue is that people want a “cure” so they can go back to doing exactly what they were doing before they got sick. That’s not how this works. You will get sick again if you make the same toxic choices that led you to disease in the first place. A true cure means a permanent lifestyle change away from toxic living.

It’s now been well more than two years since my hospital visit and changing my vegan lifestyle to fruit-based raw. At first, I was grateful each day to wake up alive. Now I am grateful to have made a full recovery. I am on Facebook daily (personal profile and Texas Fruitarian page) and Instagram occasionally and keep my profile public for anyone who desires to follow me. I enjoy posting food pictures with recipes, truth bombs, motivational life lessons, humor and healing journey updates. 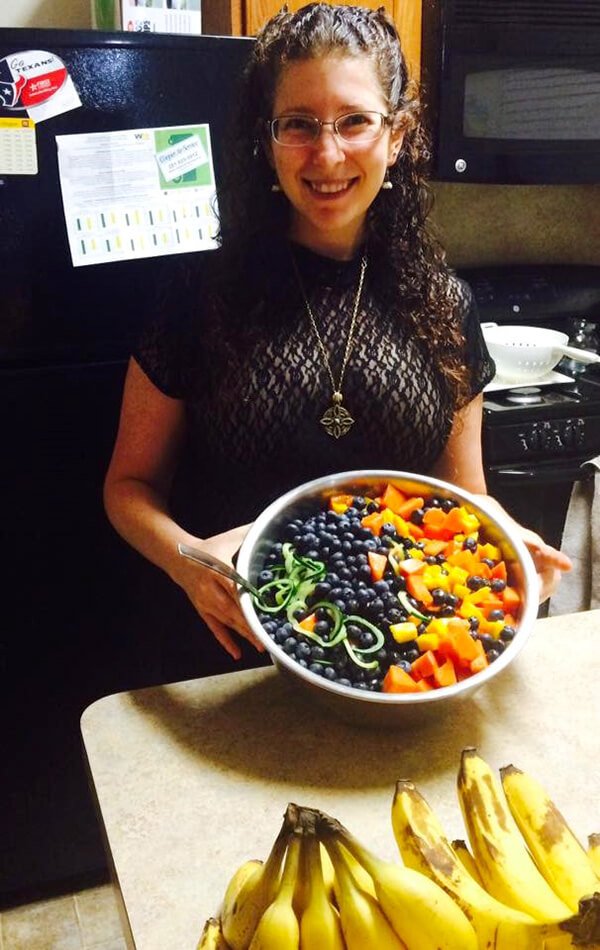 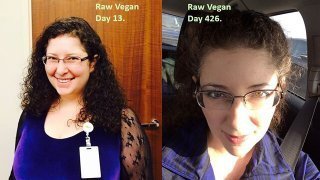 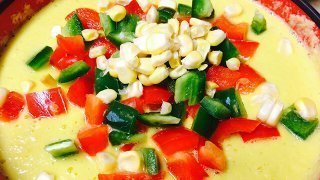 Rebecca Rosenberg is a raw vegan fruitarian multiple sclerosis warrior who chooses to do everything in her power to fight and survive against “incurable” diseases. So far, she’s winning! Rebecca is on Facebook daily and Instagram occasionally and keeps her profile public for anyone who desires to follow. She enjoys posting food pictures with recipes, truth bombs, motivational life lessons, humor and healing journey updates.