There is a principle which is a bar against all information, which is proof against all arguments and which cannot fail to keep man in everlasting ignorance—that principle is contempt prior to investigation.

This statement holds true to me to this very day, for I once lived this way. My name is Charles “Chuck” Schmidt Jr., and I used to think that I knew all the answers and that everybody else was wrong without ever really attempting to gain any knowledge or exploring any research or ideas. Needless to say, I was judgmental, close-minded and on a path of self-destruction. I was and would still be to this day mentally, physically and spiritually sick if I did not experience a complete psychic change.

I am happy to say today as a mostly raw food and spiritual vegan that I do my best to live an honest, open-minded life with the willingness to grow and learn from my surroundings—positive and negative. Based out of Lansdale, Pennsylvania, where, at Arnold’s Way, we like to say “the raw food capital of the world,” I have embarked on a healthier way of life. I am the healthiest I have ever been.

I grew up as an overweight child, very self-conscious of how others perceived me or viewed me. No one wants to be the fat kid, especially when your parents force you to be on the swim team and you have to wear a Speedo. As I look back, though, my parents kept me active with sports, but I was always heavy. Why?

Perhaps it might have been from slow metabolism or possibly my diet? I realize now, of course, it was my diet. I overate and ate everything. From junk food to big meals, including meat and dairy products, soda, etc. No wonder I was out of shape. It wasn’t till my teenage years when I started to really watch my diet and increase my exercise because I wanted to look good. I wanted a girlfriend and attracted one, but shortly afterward, I hit a dark period in my life in which I fell into a very miserable hole where I suffered from alcoholism and drug addiction.

During this time, in my late teens to my mid-20s, my health deteriorated. I became overweight, mentally unstable and physically ill. With countless number of trips to the ER, I suffered from epileptic seizures, cellulitis in my left leg, sleeping disorders, depression and, in all seriousness, lost the will to live. I truthfully no longer wanted to be in this misery and suffering, which had become me.

On October 27, 2011, I was able to put down the drugs and alcohol and start recovering from a hopeless state of mind. As a result, my journey has led me to where I am today. Now aware of who I am and the role I can play in society, I am able and desire to achieve a life beyond my wildest dreams. It is possible to do this step by step, one day at a time.

First, I began a vigorous exercise program and began to feel better but didn’t change my diet, so I got only minor results. I was still bloated, still getting cellulitis and still not feeling right due to all the medication I was on. A very high dose of Dilantin for seizures, Celexa for depression, Seroquel for sleep and lithium for bipolar disorder. I knew deep within myself that I did not desire to be on medication for the rest of my life, but all I knew was to listen to the doctors and do what they say. I truly thought that was the way and the only way. I never knew my diet played a role.

When I first heard of and met Arnold Kauffman, founder of Arnold’s Way, our raw vegan café in Lansdale, I did not even give the diet a chance. Mind you, I was stuck in the close-mindedness and judgmental chapter of my life. I already had my opinion made up without looking up any information, hearing any testimonies or seeing any evidence. I had contempt prior to investigation, a character defect that has blocked me from growing in all aspects of life. There was a period of time when I even worked at a slaughterhouse that contributed to the killing of 10,000 pigs a day—and didn’t think anything of it!

I remember when I was a child and my parents would bring home live lobsters. My younger brother and I would play with them and name them, and so, the lobsters in our minds had become our pets. This was followed by our parents’ putting the lobsters in the boiling water. I remember crying but soon forgetting—and continued on by eating the lobster. I look at that and think how I had been conditioned to believe this was acceptable. Growing older, I now played a larger role in the murder industry, where I wasn’t in the room where they were killed, so I soon forget it was pig bellies that I was turning into bacon. I had become desensitized to the fact that, day in and day out, I was working hands on with dead pigs. My ex-fiancée used to say when I came home from work that I smelled like murder. You know what? She was right! How horrible!

As my life began to change, I became open to exploring in a new positive direction in life. Spiritually, I have become a part in a connection with my Creator, The Great Spirit, God, whatever your title may be, and in my search for optimum health, a voice from within was telling me to go talk to Arnold.

Two days later—no lie—who did I come in contact with, at 11 o’clock at night at a bonfire? Mr. Arnold Kauffman himself. I approached him, and we struck up a conversation. I knew Arnold from a past relationship I was in, so he was familiar with me. That night was when our relationship began. He told me that I had to get rid of the meat and dairy and that my health would change drastically. He invited me in for a free green smoothie. I took him up on his offer and began frequenting the café. For three weeks, I was transitioning. I ate fruits all day and salad later on. I like to say I started as a raw foodist till about 9 p.m., and then I would eat a meat platter. That was about to change.

One night, I came home at 9 p.m., and there was a big steak sitting, waiting for me. I ate it and went to get ready for bed. While in my bedroom, a lightbulb went off. “There’s still another half-steak in the refrigerator,” I said to myself. So I went down and ate that. Hey, I thought I needed meat, my protein, because I am a big weightlifter. Wrong!

The next day, not only did I feel sluggish and sick, I felt spiritually and mentally drained. It was the complete opposite of the positive energy that had been flowing through me due to an influx of raw fruits and vegetables. This life-altering event had me convinced I was ready. I went into Arnold’s later that day and said, “I am ready to do your 30-Day Raw Challenge!” From that point on, I have been a mostly raw food vegan. I slowly have been weened off all medication. I have no seizures, depression or leg swelling. I sleep well at night. I lost 37 pounds, built muscle, and girls find me cute and sexy! I feel the best I have ever felt or thought I could feel—beyond my wildest dreams!

Now I can share my experience with the new person who wants to give a raw diet a try but is nervous or afraid or doubts. I say, “Don’t get overwhelmed by thinking, ‘The rest of your life,’—just do it for that day! Live in the moment and more will be revealed in time!” That’s my motto, and it works for me.

I have met so many wonderful people to help guide me on this wonderful experience. I will not lie: There are times when I have cravings, but these periods are not so bad. I reflect and see how my life has changed for the better, and I never want to move backward, only forward! This is not just a diet to me—it is a way of life that brings me closer to who I am as a whole. Positive energy runs through me with a closer connection to my higher power. I truly believe that happens from ridding my body of the tortured souls of dead animals.

Physically, I am alive and ready for what’s to come. Mentally, I am aware and awake, and my thoughts are clear. Emotionally, I am happier, stronger and excited for the ups and downs in life, knowing I can overcome and grow through any obstacle or struggle. Today, I am walking the road to destiny, with a green smoothie in one hand and a six-pack of bananas in the other. If I—a person who once so ignorantly worked in a slaughterhouse that killed 10,000 pigs a day and was barely alive, wanting to die—can do it, then anyone can experience this positive mind-, body- and soul-altering experience! 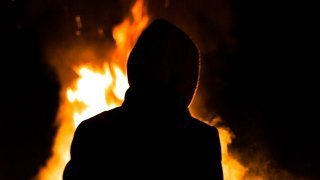