Censorship Is Making It Harder Than Ever to Find Natural Health Content. Help Your Family and Friends Plus Fruit-Powered by Sharing!
💛 Complete the Circle of Giving by Supporting This Content! 💛
Shop in the Fruit-Powered Store
Donate to Fruit-Powered
Terra Frutis began around a realization that most raw vegans want or say they want to live in nature and grow their own food. I met Peter Csere on 30BananasADay.com back when it had a chatroom and most members were not banned yet. The typical conversations went on about Bitcoin, healthy food vs. what’s unhealthy about which health foods, and the prevalent scenario of people being unhappy with their living situation. Many spent their time online on social media and YouTube and doing excessive research. Time went on, and I traveled to Hawaii but didn’t really like its drug culture and isolation, so I moved back to the mainland. Later on, I went to Ecuador and searched for land for a couple of months with terrible Spanish skills and some elevation maps with annual rainfall overlayed with transparency to find ideal areas to grow durian and mamey sapote together. 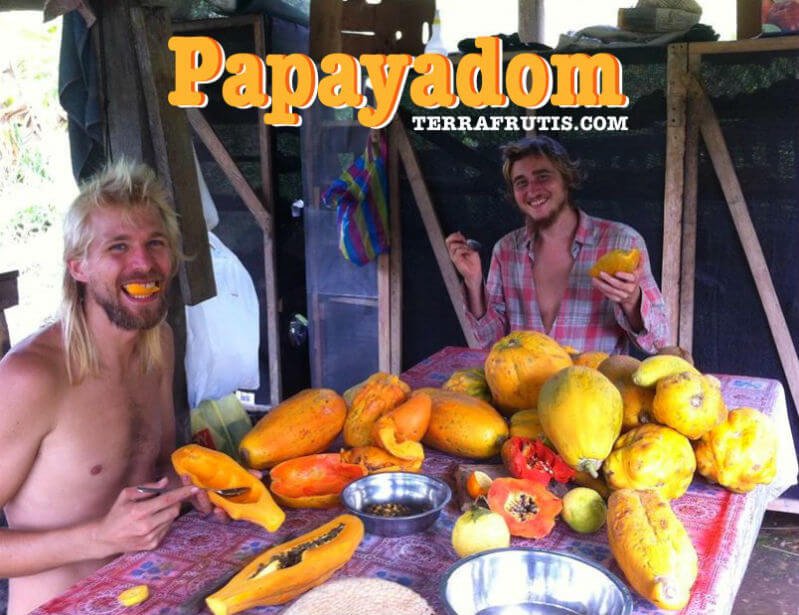 Jason Kvestad enjoys eating papayas with another fruit lover at Terra Frutis, a haven for fruitarians in Ecuador.

After some time, I wanted to find a community with similar people and found Jay Kaiser on Facebook. We met in Vilcabamba with a dozen or so others who wanted to start a raw vegan-based community. After some time passed and property hunting, we had Cocolandia to work with but were wanting somewhere to specifically grow durian with a more agreeable climate. So Jay and I went to Peru, got motorcycles and rode into the jungle and through some of the northern mountains of Peru, looking at land, and later went back up into Ecuador, from Puyo to Esmeraldas and back. Then we went down to Gualaquiza, where it was rainy but sunny, too, and is high enough in elevation to be cool at night as well as should safely grow durian. It gets 2 meters of annual rainfall, which is just enough for durian and a little bit more than ideal for mamey sapote but close enough. So we found some land there after a while of looking around.

Watch Jason Kvestad’s Video “Terra Frutis: What I Did In A Day”

We’ve got mountain streams running through the property, with one that sources itself from our own terrain so we know it’s clean and will remain flowing year round as long as we don’t cut down the trees uphill, which is now a protected forest legally. Away from the road, our main access is by boat or foot, and it’s a large plot of land—135 hectares (334 acres) in total. Initially, it was pretty difficult to get things started. One of the first people to arrive besides Jay and me was Peter Csere, who is still a big part of Terra Frutis and recently began another community nearby called Fruit Haven. In the early days, we focused on planting more bananas and papayas, improving the existing cabin and adding more structures such as converting the chicken shack into a small kitchen and building a platform with bamboo.

Fast forward a few years, and we now have about 100 durians planted, many marang, jackfruit, mangosteen, cempedak, jaboticaba, white sapote, mamey sapote, yellow sapote, lemons, mandarins and plenty of bananas. Still, we await many of the trees to bear fruit. We also currently have six structures to sleep in, and a handful more planned are to be built this year. We have great permaculture plans for future planting. Plant maintenance already is a bit out of our control, but we know more people will come and get involved. We have had more than 200 people come through—mostly volunteers—but now we have eight long-term members.

Many have come and stayed for extended periods of time. Lots of people come after imagining it will be like living in Eden but soon get bitten by bugs or are unhappy with the fruit available on the farm. I don’t try to falsely portray what we have available nor downplay what is going on here. We still have to focus primarily on building for the future. Lots of physical labor is needed for plant maintenance and housing construction. We are harvesting rollinia. We finally have an abundance of papayas, and this was a real dream come true for us when we began, and the future is going to be even better. We can clearly see that when there are jackfruits in a few years and durians a handful of years later on that this will be practically Eden. We will have year-round abundance, with a plethora of biodiversity and an understanding of the processes in nature.

More on the plants, which is one of my main focuses, besides buildings and community cooperation. I have been focusing on shipping grafted plants from Florida as our main source of quality genetics. These include pantin, pace and magaña mamey, grafted green sapote, alano and makok sapodilla, Ross sapote, emperor lychee, chanee, musang king durian, gefner atemoya and white sapote. We have multiplied our one namwah banana into about 10 plants now and soon will have 20.

Lots of rollinia is putting out fruits for the first time at 2 to 3 years old. Recently, we have a successful papaya field of about 50 papaya plants. Spotting bugs and root rot was giving us hard times with them. There was citrus already planted here, so some months we have had abundant citrus, but it’s somewhat sour. So we mix it half ’n’ half with sugar cane juice.

Locally, we do not have many options for nurseries. Almost nothing is grafted for sale here besides some lower-quality citrus and cacao.

We have planted 60 marang and about 40 pedalai trees. Some durians from seed are now 3 years old and 3 to 4 meters tall. We have many durians, but some will be getting replaced with grafted durians because we have about 80 seedling durians in the ground. We also have one grafted macadamia and some grafted lemon zest and harvest moon mangos. We are planning to plant mangos on a ridge and dig drainage to influence the 20 to 30 nam doc Mai seedlings to successfully fruit here. We get pretty cheap mangos in the market for almost six months of the year. 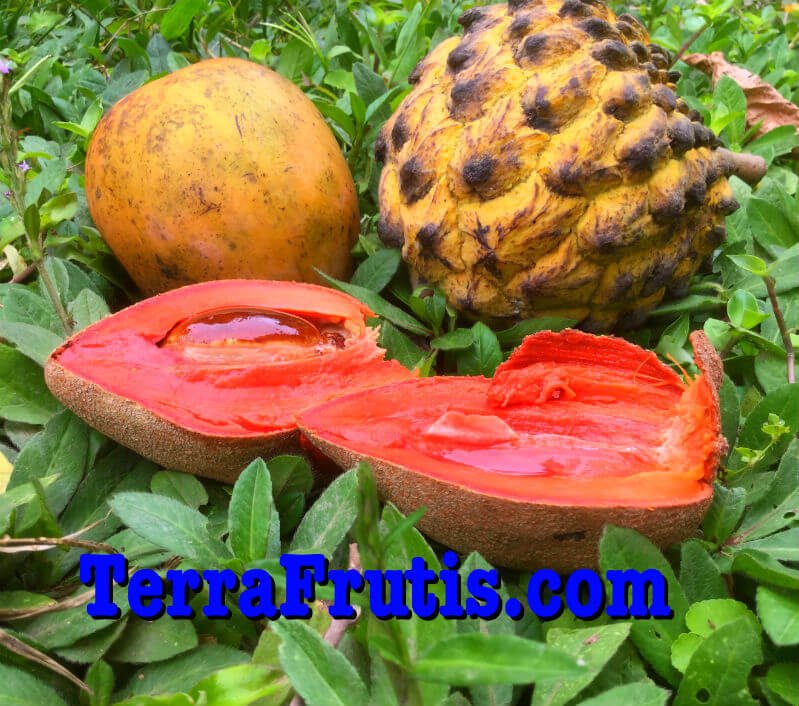 Photographed is a selection of fruits grown at Terra Frutis.

Terra Frutis is definitely a big work in progress still! 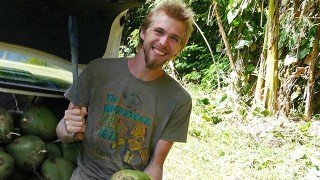 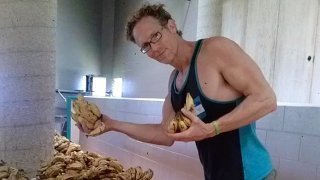 Jason Kvestad has enjoyed his adventure to a fruit-powered lifestyle, from eating a typical pyramid-scheme diet in the cold climate of Minnesota to living in the tropics and starting a fruitarian, raw vegan community in Ecuador called Terra Frutis.