The moment I learned about the raw food lifestyle, I knew I had a future in it. I have loved many things throughout my life and believed I could have made a decent living practicing them, but this love was on a whole new level. The opportunity to have a profound effect on someone’s health is a beautiful thing and highly rewarding.

I started building Nucleus Raw Foods in January 2013. It began as a long conversation with a friend and a simple sketch of a logo. Since I wasn’t too sure how I would scrape together the money and get the business off the ground running, the sketch wound up as a bookmark until I found myself on a beach in Mexico.

It was May 2013, and I had been invited by a friend on a vacation to the Mayan Riviera. I brought along several books with me, and one of them was titled The Secret. After nearly finishing the book, I knew it was time to start Nucleus, and I was going to do so by purchasing an antique VW Bus. So, as soon as I arrived back to the States and had some free time, I found a 1971 Bus and purchased it. I then began to finish my garage into a certified kitchen that would soon become Nucleus 1.0. 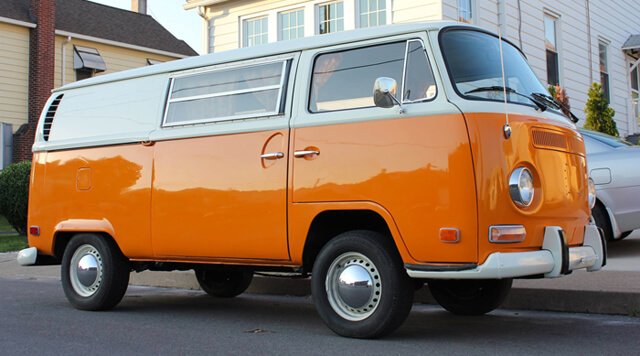 Photographed is the VW Bus Dan McGrogan bought with the intention of Nucleus Raw Foods serving juice in a mobile fashion. 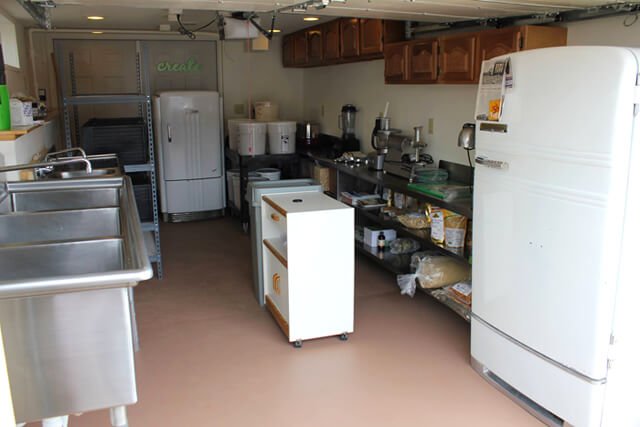 Just like Apple Computer started in a garage, so, too, did Nucleus Raw Foods. Photographed is Dan’s garage, converted into a certified kitchen.

My original plan was to work out of the bus as a mobile juice bar. I had hopes of starting operations by the summer so I could sell at local farmer’s markets and festivals. Unfortunately, Nucleus wasn’t ready to operate until September, which meant I needed to find an alternate course of action.

Initially, I thought wholesale would be the avenue I took, so I started speaking with some stores I frequented and told them about my new venture. If I remember correctly, they all wanted to carry my product and were anxious for its release. However, I knew wholesale wasn’t the avenue I wanted to take, so I continued to dream of having an attractive storefront where the rent was affordable.

A couple of months later, in December, a little store went up for rent in my hometown that was in my price range. Needless to say, Nucleus 2.0 was conceived and under construction in a matter of days. 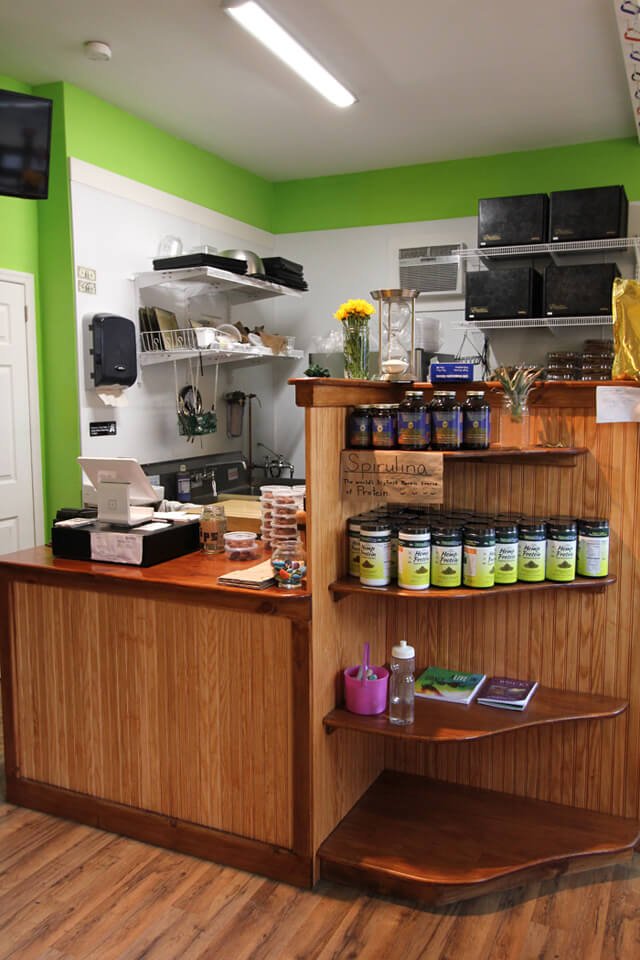 Some people were extremely supportive of my dream becoming a reality, while strangely, most were very negative with their advice and sentiment. Truthfully, I took a mental beating from people as they told me there would be no demand for the product, etc. If I said their negativity didn’t have an effect on me, I would be lying, because it did. It left me doubting myself and Nucleus’ mission on many occasions.

I’m not too sure what triggered it, but I eventually became bulletproof to their negativity. In fact, I would tell people I would soon have a storefront and before I would finish talking, I would tell them if they had anything negative to say to keep it to themselves. 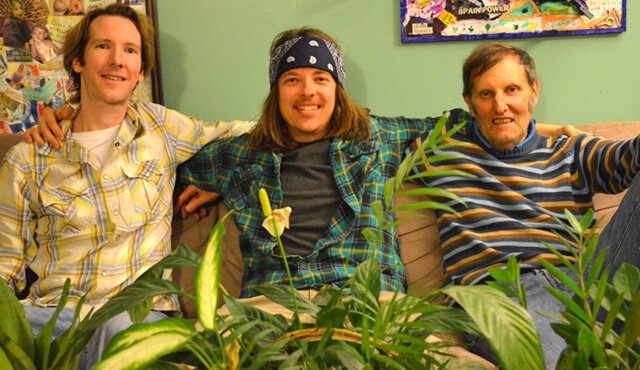 Dan (center) is photographed with Arnold Kauffman (right) and Brian Rossiter at Arnold’s home in January 2014.

In January 2014, I took a short road trip with my mother to visit Arnold’s Way in Lansdale, Pennsylvania. I went there with the intent of eating lunch and leaving, but to my surprise, Arnold Kauffman invited me to come and work at his store for a few days so he could teach me the do’s and don’ts of running a raw food restaurant. Since the café’s food was excellent, I immediately accepted his invitation and wound up working there for three days. I learned several recipes, which were incorporated into Nucleus’ menu, and met some friends I look forward to knowing for a lifetime. In all honesty, I am not too sure where Nucleus would be without Arnold’s guidance.

Nucleus 2.0 opened its doors February 21, 2014. The only sign we have to this day is a small open-closed sign in our door, and we have not done any advertising. 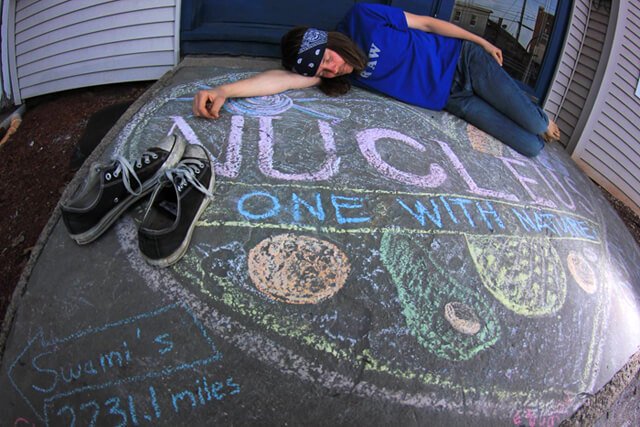 In the middle of one mid-April 2014 night, skilled chalk artists Jackie and Michele gave Nucleus Raw Foods a “proper” sign. “We seriously have the most amazing customers ever,” Dan wrote on the Nucleus Raw Foods Facebook page. “Last night, while Nucleus was at rest, our logo was impeccably drawn on our front stoop.”

The first day we were open, we served roughly 40 meals. Since I didn’t know how many customers to expect, I was the only person behind the counter, and let me tell you, it was chaotic!

Currently, Nucleus has two full-time employees aside from myself, and we serve, on average, 80 meals per day. Our customers have been wonderful, and we are grateful for their business and friendship. A community is continuing to form, and it seems as though some of our customers feel like the store is their own. 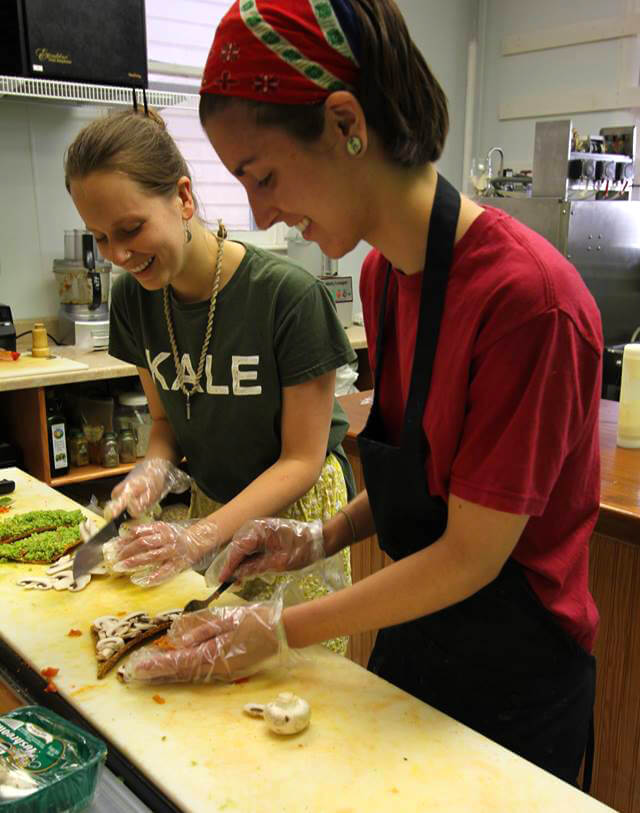 One month after opening our doors and 1,000 transactions later, it was clear our petite operation was not going to allow us to reach our maximum potential. Fortunately, there were an additional two rooms adjacent to where we were set up that we could expand into. With the addition of these two rooms, Nucleus has nearly tripled in size.

Nucleus 3.0 is here and almost complete. It is absolutely beautiful inside and should continue to make our customers proud.

Where is Nucleus headed? Let’s just say we have a plan and look forward to watching it unravel. For those of you questioning whether or not there is a demand for raw foods, let me assure you there is a huge demand. Restaurants offering a raw vegan menu are no longer the way of the future; they are the way of today. 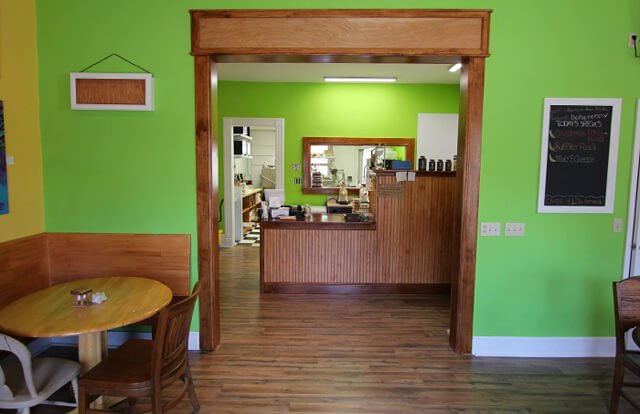 Nucleus Raw Foods in its 3.0 incarnation. Dan decided to almost triple the size of his café—responding to intense demand for raw food in Luzerne and the Greater Scranton and Wilkes-Barre areas—after being open less than two months. 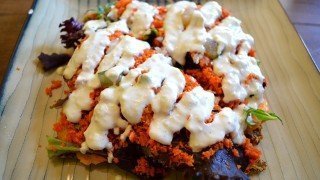 Check out a review of Nucleus Raw Foods! 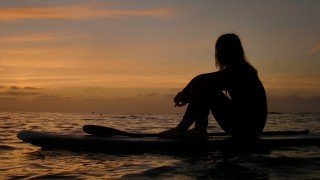 Danielle McGrogan has been enjoying a raw vegan diet since October 2011. She practices Natural Hygiene and owns Nucleus Raw Foods in Luzerne, Pennsylvania.