Censorship Is Making It Harder Than Ever to Find Natural Health Content. Help Your Family and Friends Plus Fruit-Powered by Sharing!
💛 Complete the Circle of Giving by Supporting This Content! 💛
Shop in the Fruit-Powered Store
Donate to Fruit-Powered
Since 1986, I have been an ethical fruitarian. My Czech parents gave me the name Kvetoslava, which, translated into English, means “celebration of the flower.” My raw food journey began on the day I was born, in 1957. I had been refusing my mother’s milk. She was worried, crying often, believing that I was going to die. Naturally, my mother tried to feed me anything she could think of that she considered suitable for a newborn baby.

With her experimenting, my mother discovered that the only foods I would accept were raw fresh juices from fruit and sweet carrot. Unfortunately for me, my mum didn’t understand my natural eating needs, and she never gave up trying to force-feed me anything she thought a baby should eat to maintain well-being. Eventually, I gave up and began to eat some of her offerings, to which I developed a strong addiction.

Despite my addiction to some cooked food, raw vegetables and nuts, throughout all my growing years and beyond, raw fresh fruit was always my most beloved food. Unfortunately, I was born in the middle of Europe, where the summer time abundance of fruit was for my needs way too short. Unfortunately, I was born in a communist country, where raw fresh fruit was very limited in variety and supply. For example, my most favourite fruit for almost 40 years, the banana, was available only during Christmas and Easter holidays. Once any fruit arrived in the green grocer shops, people would have to stand for an hour or two in long queues to get their limit for one family, which was one kilogram of each available fruit choice.

No wonder, under such circumstances, that I would savour each banana for at least half an hour. Fortunately, my family had three garden lots in which my father would grow a lot of fresh fruit and vegetables. Fortunately, I grew up in a big village with many public fruit trees. I was blessed enough to have plenty of yummy fruits, which I ate with zest from late spring to late autumn.

I also liked any raw or cooked vegetables. The rest of the food was more or less forced upon me. I had an aversion to sugar, fat, grains, any greasy food and most meat. With the grains, I ate only the easier-to-digest white bread and also, when supervised by adults and it was a must, sourdough bread.

In a Nutshell: Kvetoslava Martinec

Here’s a snapshot of Kvetoslava’s favorites:

I will never forget my first visit to a small supermarket just up the road from my beautiful new home. Already at the front of the shop, my eyes feasted on big mounds of amazingly cheap bananas and some other fruit I had never seen in my life, not even in a picture. As soon as I saw so many of my favourite bananas, I said to myself: “From now on, I will eat as many bananas as I want until I get sick of them.” And so I did, and guess what? I never got sick of bananas, but the truth is, in the past 10 years, I have been eating much less of them.

After I arrived in Australia, I had a lot of time on my hands. I had no family or friends around, just my husband at the time. I could not speak any English. I had a lot of time to think. I had brought with me a Czech bible, given to me while waiting in Austria to emigrate to Australia, and that had already been, for the past eight months, the only book available for me to read, as it was the only one written in my language. As I read, I arrived upon the Ten Commandments just as I had done a few times before, yet, this time, the words “Thou shalt not kill” got my full attention. I contemplated this sentence on and off for a few days.

I always loved plants more than anything else. I had a lot of love for all life forms, and I believed that plants were living creatures as well. No wonder that after only a few days, I arrived at the conclusion that if I didn’t want to kill or in any way hurt plants, I should eat only raw fresh fruit. This was the most pleasing discovery I had made so far. I, born fruit lover, was euphoric with my new idea and have embraced it ever since.

I had no concern about my health or any kind of deficiency and was not influenced by any raw food doctrine from outside. It all came out within me. Previous to my amazing fruitful fruity discovery, I had no serious health problems, just the usual minor things such as colds, flus, runny noses, occasional diarrhoea or constipation and, at times, a lack of energy.

Yet, I noticed a great improvement in my well-being after only one week of just pure fruit food. My skin looked and felt much more alive. I noticed an increased energy level. I felt much better within myself. Being disabled after a spinal cord injury when I was 13, I had to put a lot of effort into my walking, but after only one week on the fruit path, I had more energy and walked much easier. About six months later, I walked so effortlessly, it felt like I was floating.

After two weeks on the raw fresh fruit path, I felt so much better I was fully convinced that I had discovered the natural food for humans. Suddenly, I could see the pure and simple logic of it all. The fruit path helped open my mind even more, and I could see the whole world and its habits and traditions, full of confusion. As far as food goes, I saw the blind leading the blind.

For a period of 10 years, I never heard mention of raw food or a fruitarian lifestyle. When I first came across an ad for a fruitarian magazine, I was very excited to see there were other fruitlings in the world. I was travelling at that time, therefore, I had not subscribed. A few years later, living for a while in a house, I ordered the fruitarian magazine, published by Rene Beresford. In those days, the magazine had a lot of great fruitarian articles, but within a year or so, that was no longer the case. Also, I never saw any article or even hint about the ethical side of fruitarianism. After about a year of reading all the articles in Rene’s newsletter, I felt like the raw food community was also confused, so I wrote some letters to the editor, but he never printed any of them. Yet, he did like to chat with me on the phone.

As far as the raw food community goes, I see today more confusion than ever. Logically, those walking on a misleading path can’t see the truth, and the further they go, the more confused they become. I also met some people who present themselves as fruitarians, but just a short glance at them would reveal to me that they were not. I kept this information to myself. No, they did not understand or embrace the ethical side of the fruitarian philosophy. I believe that most of them had never given it a deep thought.

I believe that humanity will find the way from its confusion if they contemplate compassion and love. Because at the end of the day, love is all we need.

My biggest challenges on the raw fruit path were to make peace with the deeply confused world, especially the raw food one. Next, I occasionally battled with big cravings for bread and potatoes. Luckily for me, I had great reasons not to eat them. Plus, within a few months of being on the fruitarian path, I lived mostly in pure nature, free from all temptations. I also noticed, that while residing in the middle of the nowhere, I had no cravings at all, but as soon as I moved back into the city again, my cravings returned. Hmmm … .

My triumphs reside in the almost-constant improvement of my well-being and my awareness of this. It also helped having a mind free from confusion as far as eating habits go and making my food choices by listening to my body. I handle it pretty well if people say I am too crazy, too skinny and so on. I am also very glad I never preoccupied my mind with vitamins, minerals, enzymes, etc. or with wondering when and how much I should eat. I don’t understand how someone else should know better than I when and how much I should eat. As far as low fat goes, I was never a fan of any fatty foods, but I love to eat as much creamy avocado or durian as I desire. Thanks to my fruitarian path, the triumphs are too many to mention them all, but I cannot forget the euphoria I experienced soon after I began my blessed fruitarian path.

On the physical side, when I have back pain, due to my spinal injury, I like to lie down and read. When I am OK, I like to do some gardening, swimming and walking. Today, I live surrounded by nature and accompanied by my sweet ethical fruitarian partner, Mango, the author of two fruitarian books. I, myself, am writing two books at once.

I have not many plans for the future. I would like to live in a bit better place, farther from neighbours with cow paddocks, mono fruit crops and such. Maybe sing a little more and spend more time reading tarot cards. As I progress on the fruitarian path, I find myself more and more attracted to drinking fresh fruit juices, and I feel this will continue to be the case in the future. I hope my books will inspire many to see truth about their natural way of life so they can live to their fruitful potential. 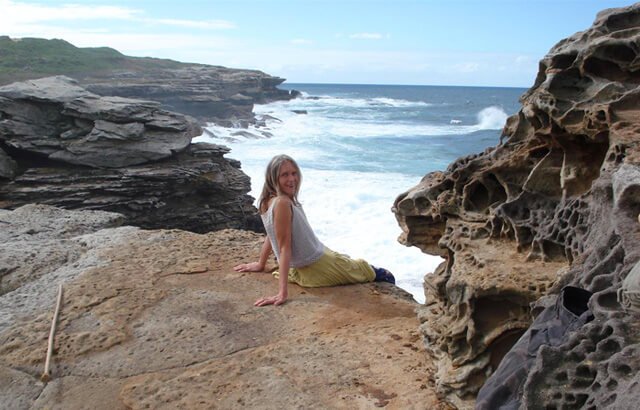 Watch Kveta Martinec with Her Partner, Mango Wodzak, in the Documentary Pure Fruit

Watch Kveta and Mango on “The Feed” on SBS, an Australian Television Network 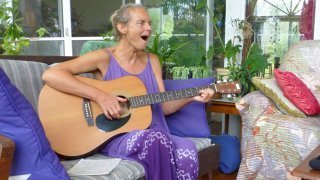 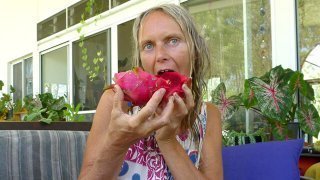 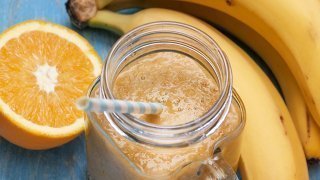 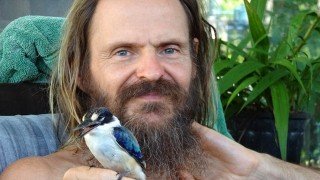 A barefoot ethical fruitarian from the Australian tropics, Kvetoslava Martinec is following the path of love. Since 1986, love and the biblical Commandment “Thou shalt not kill” inspired and led her to the ethical fruitarian lifestyle. She is a writer, homemaker, gardener, writer, dressmaker, guitar player, singer, gypsy tarot card reader, drawer and reader. E-mail her for gypsy tarot card readings.