Censorship Is Making It Harder Than Ever to Find Natural Health Content. Help Your Family and Friends Plus Fruit-Powered by Sharing!
💛 Complete the Circle of Giving by Supporting This Content! 💛
Shop in the Fruit-Powered Store
Donate to Fruit-Powered
Chronically ill for six years straight, I had to find the answer that would lead to living my life to the fullest for the first time. In 2006, I was diagnosed with salmonella poisoning, which led to having chronic irritable bowel syndrome. For about two years straight, everything I ate would result in severe stomach pain and diarrhea. At around the same time, I started getting chronic migraines. I would sometimes have such horrible head pain where I couldn’t do anything but lay down in a dark room, not being able to speak because the vibration of my own voice would cause my head pain to get worse. They tried every pill possible on me, with no relief.

About a year later, I went to a doctor in Boston who believed I had endometriosis, [a female health disorder that occurs when cells from the lining of the womb grow in other areas of the body, leading to pain, irregular bleeding and possibly infertility]. I had laparoscopic surgery to find out I indeed did have this health disorder. I would menstruate for months straight and have contraction episodes that would last up to five hours. I had been on hormonal birth control medication since 2002 and then was put on injections to try to control the endometriosis symptoms, with no luck. Along with all of the medical issues I was dealing with, I suffered from severe depression. I had been bullied in school and dance classes my whole life, and this really took a toll on my self-esteem. I dealt with verbal abuse from a relationship I was in and was also verbally and physically abused by my first dance teacher. I never loved or valued myself because I believed everything that everyone was telling me when they were abusing and bullying me. I was also depressed from the physical pain I was in every day. Chronic pain and sadness ruled my life. 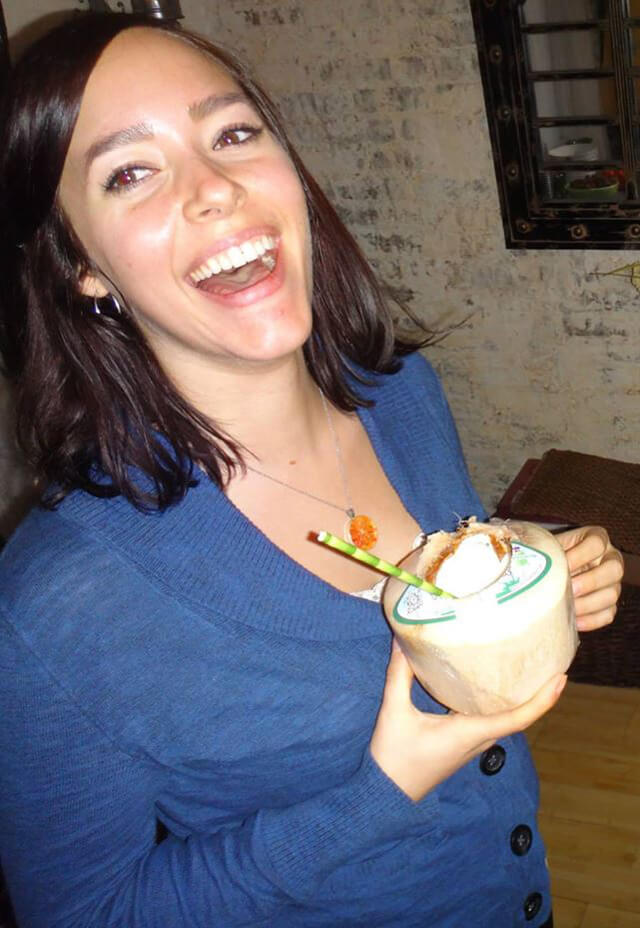 Getting salmonella poisoning was a blessing in disguise because this was the catalyst for me to adjust my own diet. I could no longer digest anything heavy such as oils and dairy products without getting very sick almost instantly, and I got completely turned off from meats as well because they made me feel horrible. This led to my eventual adoption of a cooked vegan diet. Having danced my whole life, I wanted to get in the best shape possible so I could excel at performing my art. I was restricting calories on a cooked vegan diet because I thought that was what I was supposed to do to stay fit. I would allow myself only one apple a day for something sweet because I thought sugar was “bad.” I remember thinking one day, “There has to be something better.” 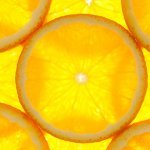 I didn’t want to restrict myself to such tiny meals to stay slim and fit. I had been to a vegan restaurant that had a raw vegan options dish that I loved. It was raw butternut squash “pasta” with a creamy sauce made of nuts. As soon as I remembered how voluminous and filling that dish was, I went right on the Internet to research “raw vegan diet.” In September 2011, I went on YouTube and typed in “raw vegan” in the search bar. The first video I noticed was titled “Girl Eats 50 Bananas A Day.” Intrigued by her slim physique and vibrancy from the videos’ thumbnail, I decided to watch. It was a video of Freelee and Harley [Johnstone, a.k.a. Durianrider). In this video, Harley asked Freelee everything she ate that day. Shocked by how much she ate, and the fact that it was sweet fruit, I was thoroughly intrigued. I followed the links from the video to their site, 30BananasADay.com, and after researching some more, I decided this was the answer I was looking for: a low-fat raw vegan diet.

I started this diet right away and was feeling really good. I ended up falling off of the diet about two months in and could not get back on. I was dealing with emotional stress from my chronic pain, side effects from medication and just feeling depressed that I still had to be on medications and that they weren’t working. This just led to a downward spiral into using food as my comfort and falling back into cooked vegetarian and vegan foods. I felt horrible about it, like a failure, exactly what was in my belief system from the years of bullying and abuse. I knew that the low-fat raw vegan diet was the answer, but I was struggling miserably. This led me to making my decision to go to the Woodstock Fruit Festival in 2012 to meet all the people in the low-fat raw vegan movement and learn everything I could to try to help me find out why I was not succeeding on the lifestyle.

I went to every lecture I possibly could, having to leave some from migraines and dealing with the never-ending endometriosis symptoms. I made it a point to go to every one of Dr. Douglas Graham’s lectures. The lecture that stuck out to me the most was his lecture on fasting. As soon as that lecture was over, I asked Dr. Graham if he ever had anyone come and fast with endometriosis. He said yes and that the endometriosis went away. As soon as I heard that, I told myself I was finding a way to go fast with him. Through the Law of Attraction, I was able to go and complete a 25-day water fast with Dr. Graham in January 2013. From this life-changing fast, I no longer suffer from IBS, chronic migraines or endometriosis. I couldn’t believe it myself at first, realizing I wasn’t in pain for the first time in six years!

I took myself off all the medication I was on before I fasted, marking the first time I was off of some form of medication since 2002. I also learned how to properly follow Dr. Graham’s The 80/10/10 Diet, realizing I wasn’t following it correctly in the first place. A lot of emotional healing occurred during my fast as well and has continued to occur since. Toward the end of 2013, I had a lot of realizations and insights about myself. The catalyst to diving in deeper to myself emotionally was from Gigi Torres’ dance training program “Establish Your Empire Experience.” I feel like a completely new person because of these realizations. 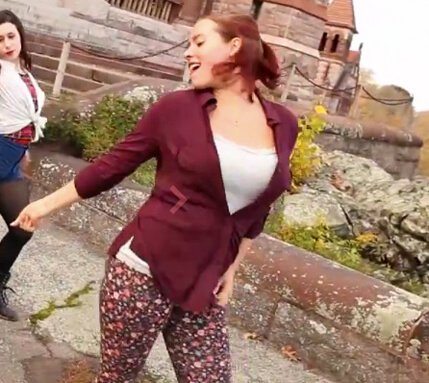 January 1, 2014, marked my one-year anniversary of being 100 percent 80/10/10 low-fat raw vegan, and I could not be more proud of myself. Not struggling on the lifestyle that I wanted to succeed on is the best feeling! From all the depression I used to deal with, I can truly say that I love myself for the first time in my entire life. I am continuing to grow more and more each day. This “new me” was inside all along, just waiting to come out. I have made the most amazing friendships from finding this lifestyle and have a whole community I am a part of. I am forever grateful to Dr. Graham and Gigi Torres for helping me change my life.

My biggest tip for anyone struggling to stick to the lifestyle would be to assess your veggie and nonsweet fruit intake. I can honestly say this is the tip that has led to my success. When I was struggling, I was focusing on eating just sweet fruits and not any veggies or a very minimal amount of them. After learning from Dr. Graham at my water fast, I realized I wasn’t following the recommendations of The 80/10/10 Diet for 2 to 6 percent of your calories coming from leafy green veggies. Along with this tip, I can say that diving into myself emotionally has been a huge factor in my success. I think self-love is so vital to success in any area of your life, and finding the root of your emotions can greatly help you achieve what you desire. 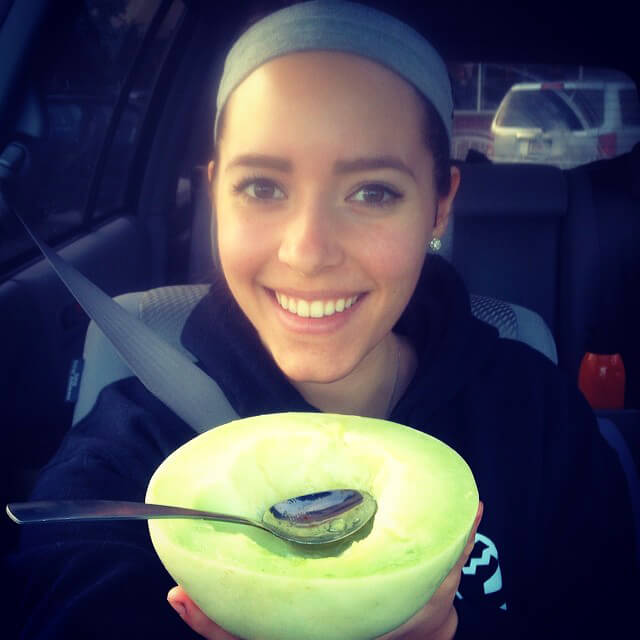 With my health at the best it has ever been, I am working on following my passions in life. Dance is my ultimate passion, and I am working hard at following my dream. I am also studying exercise science in college, and now that I don’t have to stop semesters of college from being sick, I can finish up my degree. I am moving to California in the future to pursue dancing, and I also plan to finish schooling out there as well. I have a whole new lease on life and am taking full advantage of it.

After six years of chronic illnesses, Jennelle was in search of an answer to be able to live her life to the fullest. She found that answer in water fasting with Dr. Douglas Graham and his teachings in The 80/10/10 Diet. Chronic migraines, endometriosis and irritable bowel syndrome are now a thing of her past. As a result of her health changes and new lease on life, Jennelle's emotional health has been positively affected. She no longer deals with severe depression and is growing more each day with positive mental health. Jennelle feels like her true self is finally coming out.

2 thoughts on “Jennelle LeMoine: ‘I Have a Whole New Lease on Life and Am Taking Full Advantage of It’”