Censorship Is Making It Harder Than Ever to Find Natural Health Content. Help Your Family and Friends Plus Fruit-Powered by Sharing!
💛 Complete the Circle of Giving by Supporting This Content! 💛
Shop in the Fruit-Powered Store
Donate to Fruit-Powered
During a rock climbing trip at the Red River Gorge in Kentucky in early fall 2011, a friend and I came upon two dogs in the middle of the road that appeared stranded. They were emaciated, flea- and tick-ridden, and obviously craved attention. We ended up bringing them home to Philadelphia after posting flyers and even taking them to the pound, which turned out to be a kill shelter. I was in the beginning stages of my raw food diet and was faced with a responsibility that brought forth this question: What is the best possible diet I can give these guys?

There was not much time to do research because hungry mouths were waiting to be fed. The bottom line was that it had to be organic, so I hit up the local supermarket and bought all the cans of organic dog food I could get my hands on. I continued this on a twice-weekly basis since the supermarket had only so much in stock at once. It was the best I could do for them, at the time, until I had performed enough research on their proper diets. At least it wasn’t conventional dog food, which I believe to be the No. 1 cause of pet illness and death.

I simply reflected back on what I learned about human anatomy, the digestive system and how food affects health, which ultimately resulted in my adopting a raw vegan lifestyle. The answer once again was to refer to nature, and that is what I did for my furry companions. I took them off the organic dog food diet and gave them green smoothies made from bananas, apples, pears, dates and either kale or collards. They enjoyed their share of carrots and potatoes as well. Their energy levels increased within a couple of days, and their coats went from dull to shiny after several weeks. Their bowel movements went from wet and stinky to dry and odor-free. I attribute this to the fruits and vegetables that were introduced into their diets.

I also attribute this to the organic raw chicken I gave them on an almost daily basis. I did, after all, refer to nature. This meant learning about the anatomy of dogs and understanding how their digestive systems work. It also meant looking into their traits and watching them in action.

Look at a dog or think about how they look, and it becomes apparent they are designed as hunters starting with their ears, which are meant to capture sounds not detectable by the human ear. This allows them to easily detect prey from a distance.

The legs and paws are essential for sprinting, which comes in handy when chasing prey. This along with tough, padded paws and sharp claws that grip into the ground allow for maximum speed and cornering.

While their sharp teeth are made for digging into and tearing apart prey, their muzzles are made for clamping force and leverage. Large throats enable the swallowing of heavy pieces containing fur, bone, flesh and organs.

As with any carnivorous animal, dogs are naturally wired to chase after prey. The only time they may not take off after something is if they are not hungry enough or if they have been trained not to do so. Shortly after we brought the dogs home from the Red River Gorge, I watched as one of them took off after a groundhog, grabbed it and shook it wildly, almost killing it. There was not much I could do to stop the dog except run and pin him to the ground in order for him to release the groundhog. Another time, I watched as the smaller dog saw something and darted after it in a graceful prance across the lawn like a cartoon deer. Again, there was nothing I could do except watch in amazement.

I’ve noticed when feeding plant-based foods and even processed dog foods to dogs, they tend to be more submissive in general. However, when feeding them meat, they seem to be more aggressive and sometimes even playful, just like other carnivores out in the wild. Even the house cat will grip a chicken leg with its claws, eating it while suspended in midair! This aggression prepares the animal’s digestive system for the food, increasing the acid levels of the digestive enzymes. This is why, when feeding a dog meat, you should let it eat alone, away from other people and animals. I think it is unwise to suppress an animal’s instincts because, first of all, it is how outbursts and accidents happen. Secondly, by suppressing instincts, you are taking the “animal” out of the animal that keeps the fire burning, which otherwise keeps it in an energetic, thriving state. Put out the fire and the animal eventually dies from passivity.

When I compare dogs with the anatomy of humans, it is easily understandable that humans cannot smell, hear or even run like dogs. Even if we single-handedly caught prey, how are we to tear the flesh apart with our flat, herbivorous teeth and bare hands? We may have the brain to invent tools for cutting, but then we are left with digestive issues. Animal matter goes rancid and gets backed up in our long, alkaline digestive systems consisting of narrow passageways and a stomach optimized for breaking down plant carbohydrates, unlike carnivorous digestive systems, which are optimized for thriving on animal matter.

If you put meat next to a fruit or vegetable in front of a vegan dog, I wonder what it would eat first and how it would eat the meat if it ate it. Even if the dog didn’t eat the meat right away, I would be surprised if it didn’t eventually go after the meat first in further experiments. I think I would be depriving a dog if I fed it an herbivorous diet, just like I would be depriving myself if I ate a carnivorous diet. As for the claim that dogs are omnivores, bear in mind the Latin definition means “to devour everything.”

Be sure do your own research before attempting to feed your loved one any raw meat products. I recommend consulting a holistic veterinarian regarding any dietary changes and scheduling an appointment immediately if the animal is ill. If your pet is on a conventional processed diet, it would be a good idea to help it transition to a raw meat diet by mixing cooked meats with its current diet. Be sure to throw away any cooked bones because they may splinter and cause internal damage. When they are eating cooked meats alone, cook the meat less and start adding in raw meats before making the transition to a raw meat diet. This process may vary depending on the animal’s immune system.

My dogs made the transition from organic dog foods to a raw meat diet in about a month without any problems. It is important to get the best quality meat, even if the meat is not certified organic because a lot of small local farms do not have the money to pay for organic certifications even if what they do is considered organic farming. If your pet is ill, substitute its conventional diet with organic cooked vegetables such as carrots and potatoes. Don’t be afraid to give them green smoothies, but feed these as their first meal and wait at least a couple of hours before feeding them again. Green smoothies replicate the digested matter of herbivorous prey which are consumed by the predator. Once recovery is apparent, slowly add in cooked and raw meats as described above. Once again, an experienced, truly holistic veterinarian is probably the animal’s best chance for survival.

We are the only species in the world with an herbivorous anatomy whose nutrition is derived mostly from animals. We are the only species that cooks its food. We are also the only species with the responsibility of providing food for other species, so why not feed them diets they are anatomically designed for? It’s a win-win situation when one stops eating meat and gives it to his or her dog or cat instead. 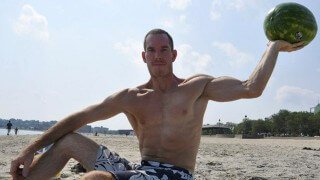