Censorship Is Making It Harder Than Ever to Find Natural Health Content. Help Your Family and Friends Plus Fruit-Powered by Sharing!
💛 Complete the Circle of Giving by Supporting This Content! 💛
Shop in the Fruit-Powered Store
Donate to Fruit-Powered
I am not perfect. Are you? Do you know anyone who is? What is perfect?

Today, on a run, an eagle that was soaring in the picture-perfect, cloud-free sky caught my eye. Two miles in, I felt like turning around. At mile three, I felt like I stopping there and crawling home, but that all changed around mile 4.

The night before, in a moment of frustration and weakness, I broke from my diet of raw fruits and veggies and ate some old comfort food, which didn’t leave me very comforted. It was a Saturday night, and I didn’t have much in the way of groceries because we were planning on going shopping the next day, but I did have enough for my nightly salad, which I seldom miss. Through a series of unfortunate events, however, I unknowingly included a large peach pit in my blender while making my dressing. It wasn’t until the second bite, when I damn near cracked a tooth over a pit fragment, that I realized what had happened.

After trying to push through and just “chew softly”—whatever that means—I decided it was not in my best interest to continue to eat the last bit of salad I had in the house. My wife, who is pescatarian, which essentially means she is a vegetarian who eats fish (originally I suspected she made that word up, but, apparently, it’s a real thing—who knew?), frequents a local vegan pizza restaurant and had just gotten back from getting dinner for herself and our daughter. I slipped, fell and landed face down in vegan cheese pizza.

When I got up the next morning, I decided to go for a run, hoping it might help flush the mistake out of my body sooner. Three-and-a-half miles in, I found my head hanging down and my stomach pleading for relief. Through the shame, I felt the urge to lift my head so as to face the head-on traffic, literally. This is New Jersey, after all—these drivers will mow you down and come back for seconds! So with my head held high, I pushed on. As I was looking straight up out of sheer exhaustion, an eagle crossed in front of the sun. As you can imagine, I see quite a few birds on my excursions. Was this one any different? I don’t know, but for some reason he kept my attention, and I watched him for a few seconds as he effortlessly crisscrossed the sun. Out of nowhere, this thought popped into my head as if the eagle whispered it directly into my ear:

Not too long ago, that was me, soaring high, effortlessly going long distances, getting closer to nature, full of purpose and drive, but now I am in the gutter, struggling to complete a 5-mile run that was once a warmup. When I started off on this path, I would spend countless hours reading up on and researching diet, spirituality and practicing meditation.

Somewhere along the way, I started losing the fiery drive I once had. Whether it from the pressures of work, society, home life or the exhaustion from dealing with all three, I found myself falling into lazy habits that were a part of my old life. I need to get back on track, look up more often, find more productive ways to spend free time and not be afraid to ask for help. 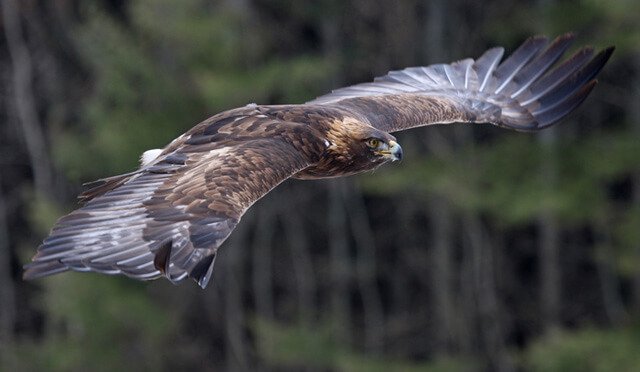 So with my arms open, I asked the eagle to lead me. From that moment, he stayed in front of me and led me the remainder of my run. He even turned down my street, and it wasn’t until I was 100 yards from home that he took off, out of sight. When he was gone, I sprinted to my house, excited to share this experience with my wife. I busted through the door like a man who had just been released from purgatory only to find a sleeping wife and child. My dog did have a look on his face as if he was ready for some deep convo, but rather than tell the story twice, he would have to wait.

I hit the shower, secretly being louder than usual so that someone would get up, then finally it overtook me, and I couldn’t wait any longer. I called my wife’s name out from the shower. She stumbled into the bathroom with the hair of Don King and one eye open. I took her by the arms gave her a kiss and pulled her into the shower, fully clothed. Usually this kind of act would have been handled with extreme prejudice, but I’m thinking the fact that she was still half-asleep worked in my favor. Knowing she would soon come to her senses, I held her tight, spilled my heart out and asked her for help.

Not only do I need help, but we all need help. I have been frustrated because there is a lack of low-fat raw vegan, or LFRV, support here in my little corner of the world. I keep saying to myself, “If I only lived in San Francisco, things would be better” or “Once I get to Woodstock, I will get reinspired.” 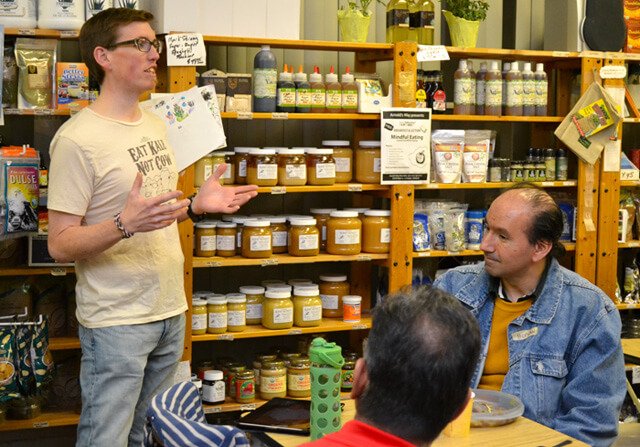 Jason Young discusses his losing 140 pounds on a 65-day juice fast and raw food diet at the April 2013 potluck at Arnold’s Way. The Lansdale, Pennsylvania, raw food café offers a supportive community for raw fooders at all stages of their health journeys.

But now I am starting to look at things a little differently. Instead of looking for others to inspire me or look to faraway places as an answer, what if I were to look around my own community? What if I were to stay here, where there is no LFRV community, and start one? Like in the Edward Sharpe and the Magnetic Zeros song, “I am looking to become not the pray-er but the prayer.” Rather than joining an established community in other states or countries, why not start my own? There are so many ways we can all spread the word about this lifestyle and its benefits on a local scale. We need to plant seeds in our communities and be a beacon for those around us, and that is what I intend to do! Being inspired through inspiring others—there is no better feeling!

Since starting on this journey to an LFRV lifestyle, I have seen tremendous growth in my spirituality as well as being more in tune with nature, but I would still be the first person to roll my eyes if someone told me an animal spoke to him or her. But that is what happened! Did this eagle come land on my shoulder like a pirate parrot and bawk in my ear? No. It’s a good thing, too, because I probably would have screamed like a schoolgirl and ran into the woods. I believe, however, if you open your mind and heart and really look at nature, it will talk to you. It can teach you things no book or YouTube video can. I learned a great deal that day in a very short period of time, all thanks to an eagle. 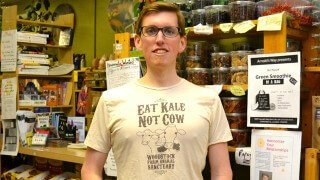 Jason Young of Atlantic City, New Jersey, lost 140 pounds on a low-fat raw food diet after starting his journey to health with a 65-day juice feast. He now runs marathons.