Rasayana Raw Café in Bangkok serves up a large selection of raw food dishes—from salads, sandwiches and burgers to pizzas, tacitos and sushi—along with juices and desserts. It’s a rare occasion for me to eat out at a restaurant other than Arnold’s Way raw food café in Lansdale, Pennsylvania, and this restaurant comes with a recent endorsement by none other than Freelee and Harley “Durianrider” Johnstone of 30BananasADay.com fame. I was very pleased with the experience and would return to sample more meals.

“The new Rasayana is the best raw vegan restaurant in the world.”
—Freelee

Finding this out-of-the-way restaurant required two trips because it’s tucked waaay back off the road on which it’s advertised, so I advise anyone to have a map, screenshot or smartphone handy when tracking down Rasayana Raw Café. With no smartphone, I relied on the address and a foldout map, but this combo wasn’t good enough to find the treasure my first time out. By the time I arrived, the pleasant café, featuring a relaxing patio section, took me away instantly from the motorbike madness that is Bangkok, a city awash in a riot of noise.

I went with Rasayana Salad, Live Pizza and Mexican Taco Cup—and devoured them all with delight! The salad—featuring mixed greens, tomatoes, celery, carrots, avocado, pâté and more, splashed in Japanese Shoyu dressing—was tasty but small, as salads just about always are for a raw fooder’s belly. Live Pizza boasted a flaxseed-tomato crust and was topped with marinara sauce, vegetables and a creamy sauce, presumably made with cashews. It was very good, but I wished the marinara sauce stood out more like it does in my own Pepper Pizza with Savory Marinara Sauce. 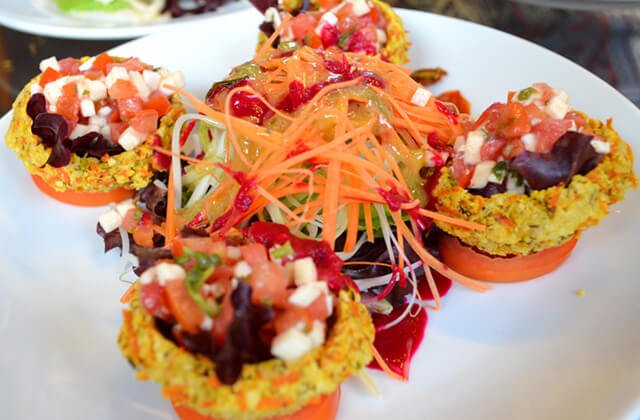 Mexican Taco Cup stole the show with its spicy salsa, made with tomatoes, coconut shoot, cilantro and a dash of cayenne powder. Muffin-size cups fashioned from dehydrated vegetables house the salsa, which was my first time having spicy food, a favorite from my pre-raw food days, in some time.

Rasayana’s menu is large, offering 11 pages of selections, which include Spaghetti & Nut Balls and soups such as Carrot Cream. A raw food enthusiast could eat here 10 times and not make his or her way through the 40-plus appetizers, soups, salads and main courses alone.

A key indicator of one’s experience at a raw food restaurant comes in the hours and the day after eating these foods. I’m happy to say, even after eating poorly combined foods (avocado with seeds, for example) as well as ingredients (nama shoyu, garlic, sesame oil and spice in the Mexican Taco Cup) outside my regular diet, about which I’m ordinarily strict, I didn’t feel much worse for the wear. I must say, however, I was still reeling from intense jetlag and an inability to sleep much because of the never-ending motorbike parade, so any effects of feeling less than tip-top might’ve been lost on my exhausted body. 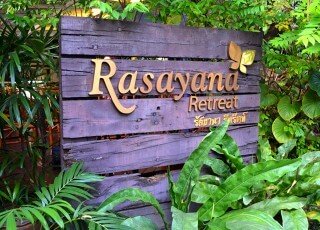 Rasayana Retreat and its raw café are an oasis amid one of the world’s busiest and noisiest cities. 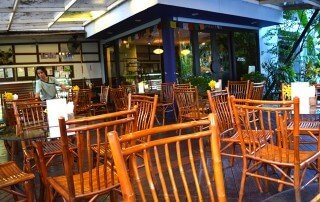 Warm, inviting environs greet patrons, who may enjoy their meals outside. 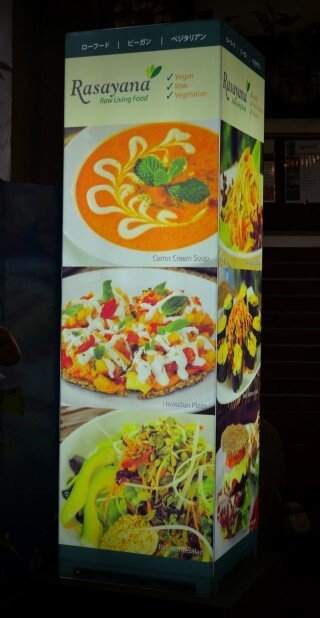 These greens were welcomed as I found my footing in Thailand.